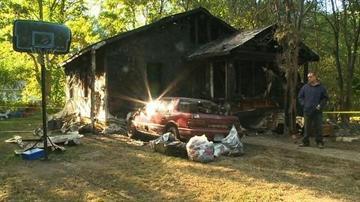 NILES, Mich. – Katlyn Whyde woke up to flames and smoke filling the bedroom around her. Her first instinct was to get out of the room. “I ran in the living room like crazy and I told my mother,” said Whyde.

Katlyn’s warning woke her mother, Beatrice Haynes, who says she was napping in the living room after spending much of the night before awake and taking care of her youngest child. The three-year-old little boy had recently had his tonsils removed and was keeping her up at night.

They didn’t know it, but according to investigators with the Niles Fire Department, Katlyn’s brothers were playing with a lighter and set the fire accidentally.

Rushing to get everyone out of the house, Haynes woke her children’s father Aaron Whyde who was sleeping in another room. Whyde says he leapt out of bed and ran to the children’s room looking for his youngest son.

He found him hiding under a blanket on the floor of the bedroom. It was a scary moment for Whyde; the room was quickly filling with smoke and he can only imagine the outcome if the boy was not found.

Whyde rushed the little boy out of the home, while Beatrice says she took one last look through the house for children. That is when she says she burnt her hands. “That’s just how much heat there was. It started baking my fingers,” said Haynes.

Eventually everyone made it out of the house, including a two-year-old child Haynes was babysitting for a friend. Whyde ran across the street to call the fire department, Haynes ran back to the front porch doorway trying to entice the family pets to escape the blaze.

Nearly all of the family’s pets died in the fire, including a red-tailed boa constrictor, two dogs and a rabbit. The family also lost most of their clothing and the family car which was destroyed in the fire.

The car was parked about five feet from the front of the home. Its tires melted, glass shattered, and upholstery burnt. A child’s car seat in the backseat was melted nearly beyond recognition.

It was also the only way for Aaron Whyde to get back and forth to work in downtown South Bend.  While he works as a dishwasher at Fiddler’s Hearth, his girlfriend stays home and takes care of their three children.

Now, without a vehicle to get around, they are worried about how they will make ends meet. For now, they are staying with Haynes parents who live across the street, and hope they find a car they can afford quickly.