Children stabbed inside a NYC elevator 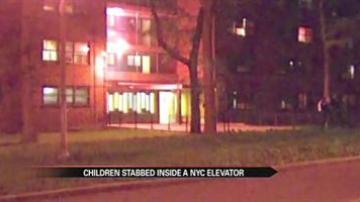 NEW YORK -- Police are searching for the man who stabbed two children in an elevator in Brooklyn.

A 6-year-old boy was killed and a 7-year-old is in critical condition.

The two were attacked on Sunday when they went inside a building to get ice cream.

The boys' father is devastated by his loss.

"He's my pride and joy, he's my life, my rock that I lived for, my backbone, and he took my light away from me," said the victim's father Nicholas Avitto.

The suspect is described as a heavyset man in his 20s.He dropped the knife outside the building right after he stabbed the children.