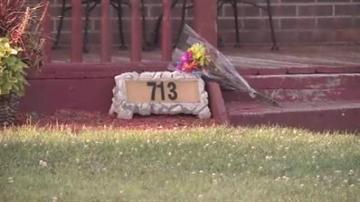 NEW CARLISLE, Ind.-- Most of the people who live on Thunderbird Drive mourned behind closed doors in the privacy of their homes Tuesday night. One neighbor put flowers on the porch of the home where the murder-suicide happened.

“We’re broken-hearted to lose two people like this and our hearts go out to the children,” neighbor Daniel Shepherd said.

Police say Michelle Zarobinski died when her husband, Drew Zarobinski, shot her then turned the gun on himself. Michelle's two daughters, ages 9 and 14, were inside the house while it all unfolded.

"For sure they will need a psychological and psychiatric evaluation at some point," Child and Adolescent Psychiatrist Vicente Gonzaga said.

According to Gonzaga, it could take months or even years for them to cope with such a violent loss.

Metro Homicide Commander Tim Corbett said the two kids need all the love and support they can get from the family, friends and neighbors in this tight-knit New Carlisle community.

"Our focus right now is to make sure these kids are safe, mentally and physically healthy," Corbett said.

Neighbors tell ABC 57 there was no sign of any arguments, and no shouting from inside the house. When we called the courthouse, we learned there were no records of domestic violence at the home.

While neighbors can't help but wonder what triggered such tragedy, all that matters to them now is that two young children survived

“I hope people in the community will do the same to show that they’re thinking about the children, which is the most important part right now,” Shepherd said.

According to neighbors, Michelle was a mortgage broker at the Wells-Fargo bank in New Carlisle.