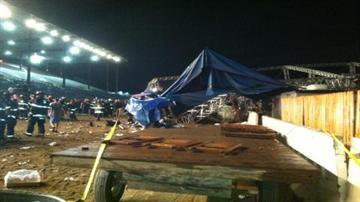 INDIANAPOLIS -- We have new information in the deadly stage collapse at the Indiana State Fair.

For the first time, chilling emergency radio calls for help have been released.

State police say they were keeping a close eye on the weather. The radio warnings began at 8:38 p.m., just five minutes before the collapse.

Then came a call of sheer panic.

"The stage has collapsed."

"Multiple reds, multiple reds, unknown blacks.  I need everything to the grandstand.  I've got at least one with a head injury."

"Situation is this, the stage framework and the speakers have collapsed onto the rows of chairs just in front."

"Can you estimate total quantity of patients?"

Seven people died in the state fair stage collapse.  45 others were hurt, including a Mishawaka woman.