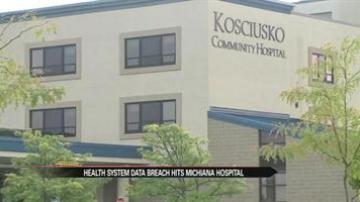 Kosciusko Medical Group said several of their clinics will be affected but they don't believe the hackers received any credit card or medical information.

If you received medical treatment in the past 5 years, the hospital said hackers may have obtained your personal information.

Sudoff said, “It’s a little scary. It’s not something you think would happen in Warsaw!”

The President of Network Computer Solutions said it appears that the hackers wanted medical device information.

Mark Marley said, “That information is very valuable in the market for things like healthcare fraud, financial fraud. According to the report they believe the group that attacked this hospital was looking for intellectual property.”

Marley said patients should change all their passwords immediately.

“4.5 million people are affected, so they are going to offer those people identity protection services and I recommend that everyone who gets a letter uses those services.”

Marley said his company installs firewalls and security systems in small businesses to prevent data breaches. Kosciusko Community Hospital said in a release that the federal government should be responsible for the Chinese attack.

Marley said, “My opinion is the government probably shouldn’t be as involved in protecting local business, I think they should protect on a national level, but every business and individual should be vigilant and protect themselves and their own data because ultimately it’s your own data.”

If your data was taken, Kosciusko Medical Group should be contacting you shortly.
Share this article: