LOOK OUT! Chinese space station could land in Michiana

NOW: LOOK OUT! Chinese space station could land in Michiana 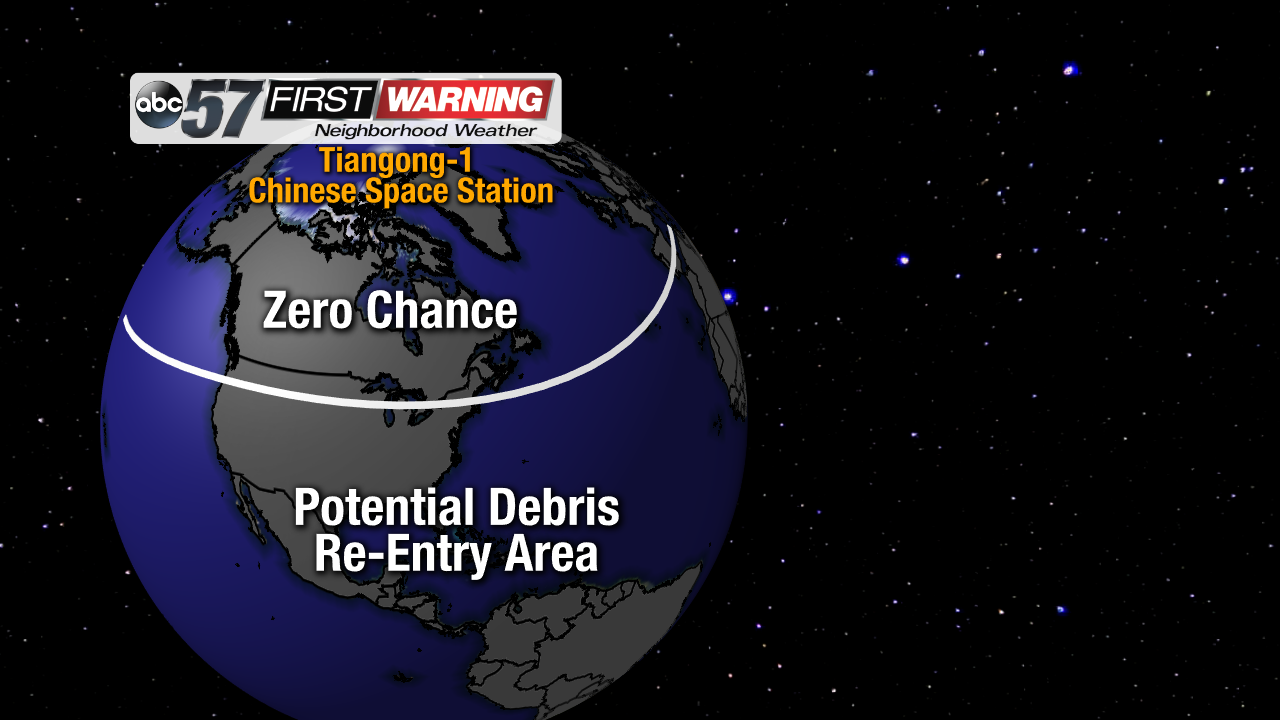 Yes, you read the headline correctly. Parts of the Chinese Tiangong-1 space station could land not only in the United States, but in Michiana! China's first space station is tumbling toward a reentry into Earth's atmosphere, and parts of it are expected to reach the surface of Earth this weekend. The center completed its mission five years ago, but stopped sending data back to Earth. That is making a controlled reentry into the atmosphere impossible and a crash inevitable somewhere.

That is what scientists do not know yet: where exactly the remaining debris from the station will land. What we do know is there are areas with a higher probability of having space station debris land there. All of Africa, nearly all of Australia and South America, southern Asia, and southern North America fall in the potential "crash zone." 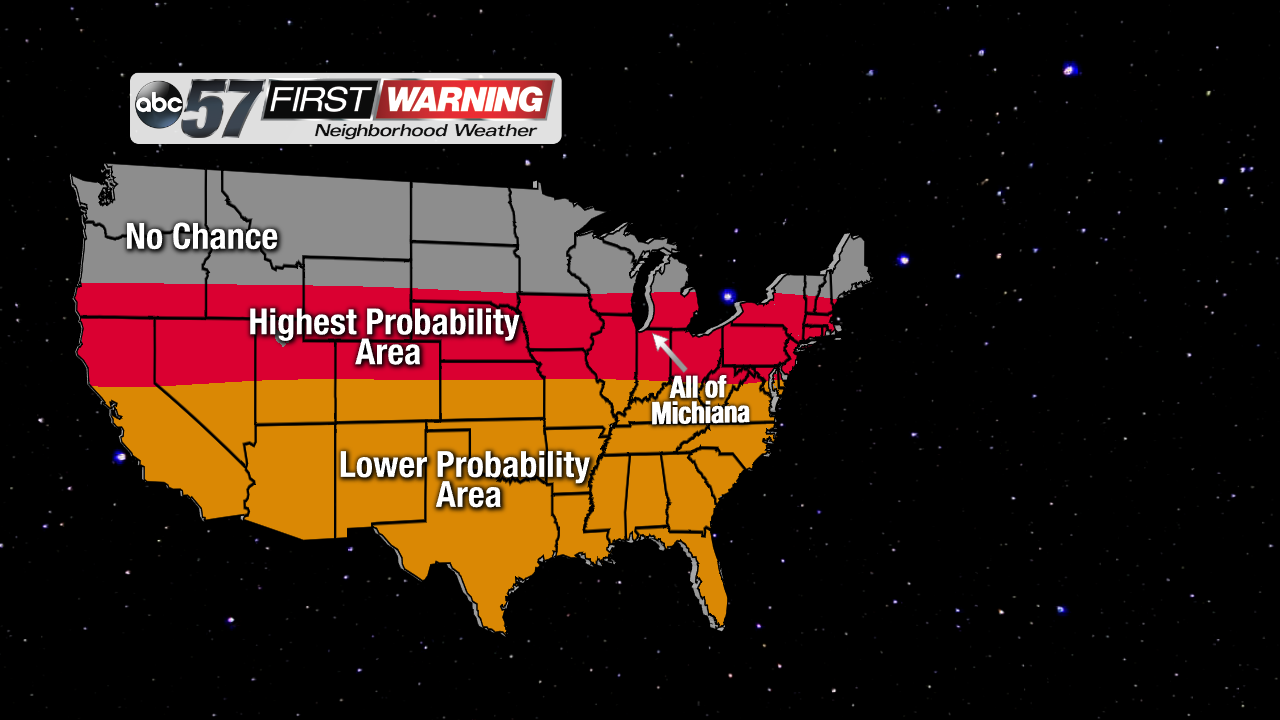 That includes a good chunk of the United States. Even more is the fact that millions in the United States fall within an elevated risk zone. Cities like Reno, Denver, Omaha, Des Moines, Chicago, South Bend, Indianapolis, Toledo, Detroit, Cleveland, Philadelphia, New York City, and Boston fall within that highest probability area. Michiana in its entirety sits in that zone. In fact, Michigan Governor Rick Snyder is activating State of Emergency operations centers to keep watch of the space station and its reentry into the atmosphere. 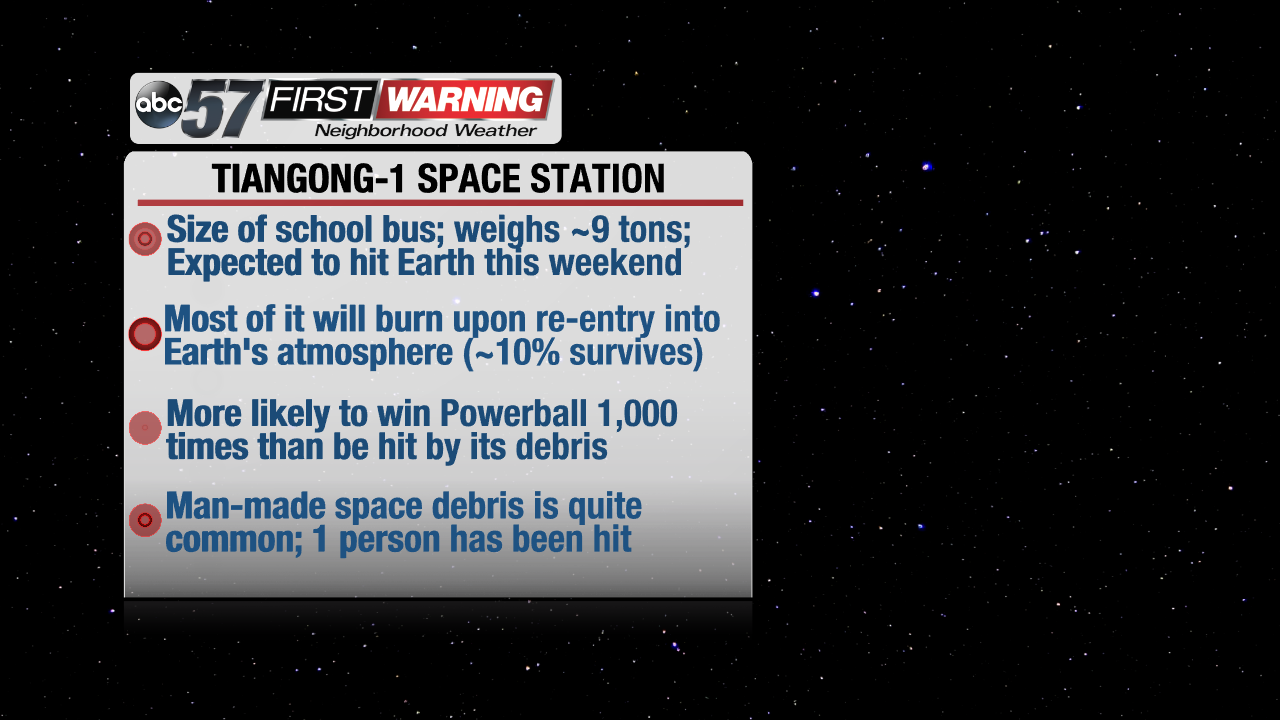 But do you need to be worried? Well, only 10% of the station's debris is expected to survive Earth's brutal atmosphere. The other 90% or so will burn before reaching the surface. That will produce a bright light show similar to what a vivid and bright shooting star would look like. Other than that, the impacts are going to be nearly nil. Moreover, only one person in the United States has ever been hit by mad-made space debris. They were not injured. In other words, you've got a better chance of winning the Powerball 1,000 times before getting struck by space debris. So, to answer the question, no, you don't need to plan your Easter egg hunts indoors out of fear of being hit in the head by Chinese space station debris. But, it would be pretty nifty to have a piece of a space station land in your front yard, wouldn't it?