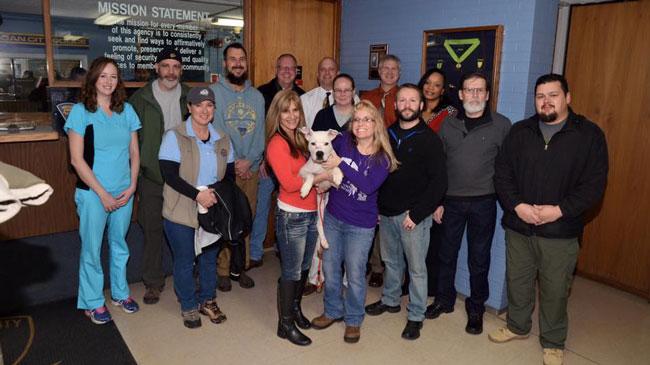 Michigan City Police and members of the La Porte County Sheriff's Office got to meet a very important canine on Thursday.

Officers and deputies got to meet a healthy Christmas Chance, the dog whose mouth was taped shut and had broken hips when it was rescued in January.

The people who got to meet Christmas Chance were instrumental in the investigation into the abuse and the apprehension of the suspect, Richard Cope, according to the LCSO Facebook post.

Christmas Chance was brought to the Michigan City Police station by his foster parent, Laura Bruccholeri, and was accompanied by Dr. Maggie Sharpe who helped save his life.

Shari Christopher, the director of Guardians of the Green Mile, also came to the department to show her appreciation for all of the efforts that went into this case.

LCSO posted, "Many people have inquired about Christmas Chance and his recovery... based on the excitement he showed this morning, he is doing very well."