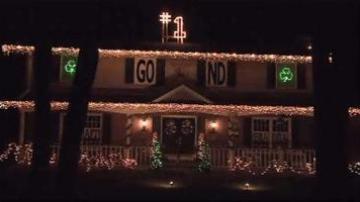 MISHAWAKA, Ind. -- From Notre Dame fanatics, to a Charlie Brown Christmas, to a surfing Santa.  Winding Brook Park has a little something for everyone.

Most people have a hard time choosing a favorite.

"It's hard to pick the best one, because there's a big huge Santa face which is cool too!  So I don't know," said Williamson.

For over 45 years, the community has decked their homes with Christmas lights.

For two weeks in December, cars full of families drive through.

Volunteers stand at the exit, and take donations. The money is then split evenly and given to eight different local charities.

The Olsen Family moved here in 2007. Mark Olsen said they knew they would have to put up lights.

"Neighbors were saying if we didn't we'd probably be run out of the neighborhood, so yeah we did put them up."

There's tradition to the lights they put on their house.  The family that lived there before them started the tradition when a 7-year-old girl told her dad that she wanted a Santa decoration on their house.

Olsen said it used to take him days to put the decorations up.  But now he's got it down to a science.

"Bring out a couple ladders and as many kids as we can muster, it will probably take half a day now."

The Olsen family said if they ever move, they will leave the lights for the next family because it feels good to be part of such a deep tradition.

"That makes it real special, it really resonates for us with the real reason for the season."