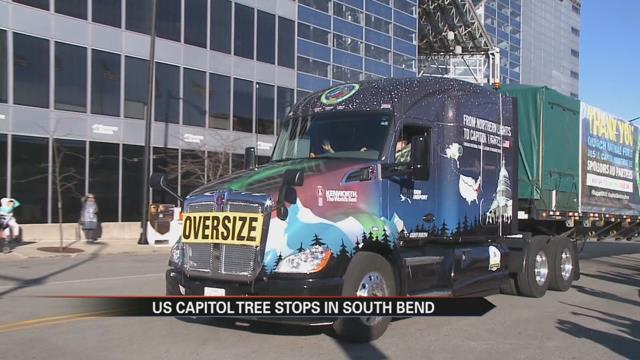 A family with ties to Notre Dame was reunited when the Christmas tree that will stand on the U.S. Capitol lawn made a historic stop in South Bend.

“I haven’t seen my uncle in over a decade because he’s been living in Alaska,” Jordan Schank said. “This has been kind of a family reunion for me.”

Jordan is a Notre Dame alumnus who now works in the school’s undergraduate admissions office.

His uncle is John Schank – Alaska’s 2014 Truck Driver of the Year and the man responsible for getting the nation’s Christmas tree to its home on the U.S. Capitol lawn.

The tree is originally from Alaska’s Chugach National Forest.

“[This is a] once in a lifetime opportunity,” John said.

The Schank family is from North Branch, Michigan, so when John found out he would travel across the country and hall his precious holiday cargo through South Bend, the family made sure they would meet him here.

“We took the whole crew, including some members of the U.S. Forest Service, to the [Notre Dame football] game yesterday,” Jordan said.

John has logged more than 5 million miles as a truck driver in Alaska.

His journey across America began on Oct. 27 in Seward, Alaska and is taking him and his wife to 15 different cities before arriving in Washington D.C. on Nov. 20.

His favorite stop so far?

“So far it’s been right here in South Bend,” John said. “A lot of family here to visit with me, good weather, good people, lots of kids. That’s what it’s all about.”

Beautiful weather drew hundreds of families to downtown where they watched performances, heard from Mayor Pete Buttigieg and were thanked by the staff traveling with the tree for a warm welcome.

The stop wrapped up Sunday afternoon and John and his wife hit the road again for Findlay, Ohio.

John said the tree is currently 70 feet tall but he expects it to be trimmed down to about 65 feet once it arrives in Washington.