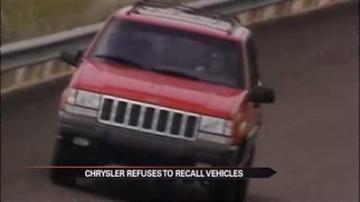 Chrysler is refusing to recall nearly 3-million cars even though the government says they are not safe.

The National Highway Traffic Safety Administration is pushing for the recall on vehicles including Jeep Grand Cherokees made between 1993 and 2004.

Government officials say the fuel tank is in a spot where it could get punctured.

"This recall will cost Chrysler $300 million to do, but that's a small price to pay to save the life of kids who are dying in crashes in Jeeps," said Clarence Ditlow, Center for Auto Safety Station.

If Chrysler refuses to budge, the government may sue forcing the recall.