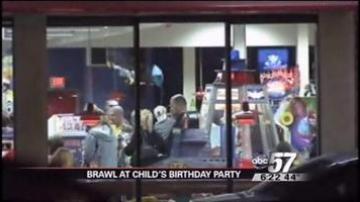 SOUTHGATE, Mich. -- A child's birthday party ended in a brawl at a Michigan Chuck E. Cheese.

The Olschanski Family threw a birthday party on Saturday near Detroit.

They claim that the party next to then was out of control, and even stole birthday favors off of their table.

When the family asked them to stop, they say they were attacked!

"I saw my Grandma go in the ambulance," said 5-year-old Steve Olschanski.

Police arrested Steven Olschanski, Sr., for disorderly conduct.  They say he was the only one making a scene when they got there.

The family wants answers from Chuck E. Cheese.  They say the other party got away with assault!