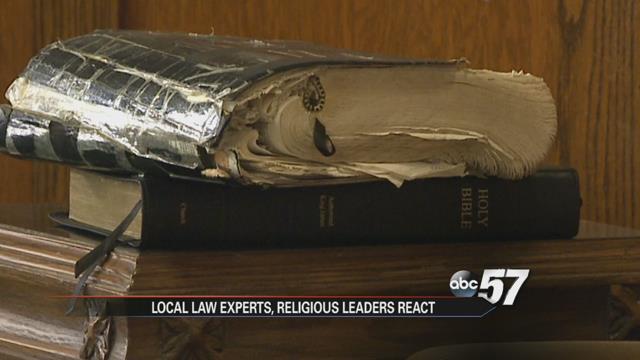 The Supreme Court ruled Friday morning that same-sex marriage should be legal in all 50 states.

Churches have different opinions on the issue. Mario Sims, a Senior Pastor at Doulos Chapel in South Bend said the Supreme Court got it wrong.

“We're going to follow the teachings of Christ and they're very clear. Ever since Adam and Eve, marriage is defined as one man and one woman,” said Sims.

He said everyone is welcome into their church; however their beliefs prevent them from marrying same-sex couples.

Zion United Church of Christ is just down the street and they have a different view on the issue.

“It's a very joyful day here. Our family is wide here and we believe in supporting all kinds of families,” said Cathy Bair who is an Elder and Worship Committee Chair.

This church has been an open and affirming congregation since 2006.

“We've been so joyful to have them get married here since the law changed but now with the Supreme Court ruling, their marriages are guaranteed under the Constitution,” Bair added.

However with the new ruling, some may wonder about the rights of the churches.

Frank Ravitch is a professor of law and Walter H. Stowers Chair in law and religion at Michigan State University, and said this ruling does not really pertain to churches.

“The court did not say and could not say that churches have to change their practices based on this, that's a fundamental protection,” sad Ravitch,

Churches are protected in their beliefs the same way homosexual couples are now protected.

“It's not necessary that same-sex marriage and religious freedom have to conflict with each other. It's possible to find a common ground,” Ravitch added.

Both churches said they love everyone.

“Love is what matters,” said Bair.

“We're to love everyone," Sims said.