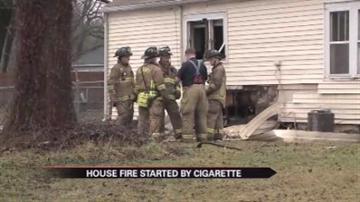 ELKHART, Ind. -- A home on Osolo Road in Elkhart was destroyed by fire Wednesday morning. Firefighters say the fire started from a cigarette that was accidentally dropped on a couch. No one was home at the time, but the family’s dogs and parrot were inside.

Monica Burchard says her heart was racing when she arrived home to find fire trucks surrounding her house.

"Because of the dogs,” said Burchard.

She and her husband and their two daughters have many pets that they cherish.

"We have four dogs but the parrot didn't make it," said Burchard. "He was downstairs in the back hallway."

She said the parrot was 27 years old and used to belong to her grandparents who are no longer living..

"It's really unfortunate that we couldn't get to the bird but they are really glad to have their dogs out,” said Derek Muncie, who lives next door.

In fact, Muncie and his family freed the Burchards’ dogs.

They had to bust through the doors.

"We knew that some of the dogs were trapped inside so we went to both front and back doors just to let the dogs out,” said Muncie.

His family called 911 around 11:30 a.m. when they noticed something wasn't right.

"There was some smoke and possibly just a little bit of fire coming out of the dryer vent,” said Muncie.

Fire officials say the fire was sparked by a lit cigarette that was accidentally dropped on a basement couch. They believe the fire was burning slowly for hours.

"It usually takes a couple of hours for a cigarette to combust on a couch because of the foam. When they got here and open up the windows then it flared back up more,” said Rob Smith, Elkhart City Fire Chief Investigator.

"Pretty smoke filled house when we got here,” said Muncie.

Muncie says he wanted to make sure their furry friends got out alive.

"Our dogs are just like babies. It's nothing that we wouldn't expect them to do for us,” said Muncie.

Monica said one of the dogs suffered some smoke inhalation and had some minor burns.

A Good Samaritan dropped off a box of dog bones and $100 for the family to take that dog to the vet for treatment.

They say they are very thankful because they did not have insurance on their house and money is tight.