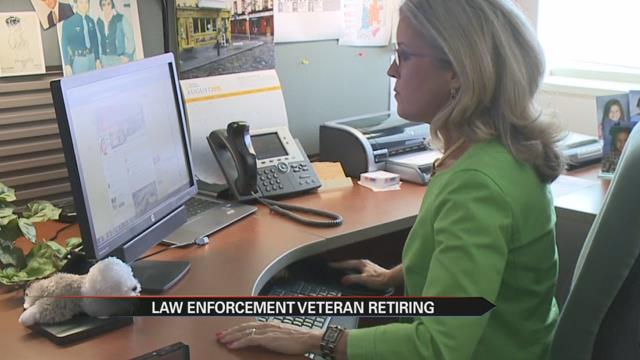 After 31 years of keeping South Bend residents safe, one of the South Bend Police Department’s leading ladies is retiring.

Cindy Kilgore is the third coordinator of the Michiana Crime Stoppers Program. She stepped in after Lt. Dave Shock retired 8 years ago.

Kilgore said, “I'm just the third coordinator because it's been such a good job we get it and we stay.”

Before Crime Stoppers, Kilgore spent 15 years in the investigative division and worked as a Patrol Officer before that.

And it’s during those years that she saw the most action.

But her years as a Crime Stoppers coordinator weren’t easy either.

“A lot of my job has morphed into having contacts and relationships with the victims’ families.”

Which she tells us makes each case a little more personal.

“That can be very raw, very vile, very disturbing. So many times people said to me ‘I don't know how you can do it.’”

But she did do it. And as her time with the police department comes to an end, Kilgore says she’s not counting down the days.

“The opportunity we have to make a difference in peoples’ lives, that's what I am going to miss the most. A lot of people are saying ‘how many days do you have left?’ Well, I don't know. I'm not counting because I'm not in a hurry for the door to hit me on the way out.”

There’s a press conference next Wednesday September 2nd where we will all find out who is taking over as Kilgore’s successor.