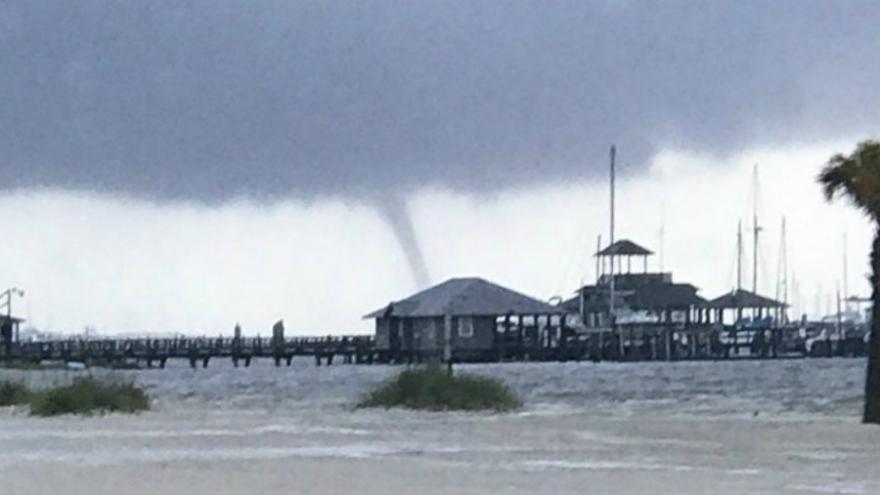 By Nicole Chavez and Ralph Ellis

(CNN) -- Cindy weakened to a tropical depression Thursday but still brought heavy rain, powerful winds and the threat of floods to the already soaked US Gulf Coast.

Cindy was a tropical storm when it made landfall before dawn just south of Lake Charles, Louisiana, the National Hurricane Center said. At 4 p.m. CT, it was moving at 10 mph with winds of about 25 mph and was about 45 miles south of Shreveport, the National Weather Service said.

"It's not as bad as we had feared, but it's certainly not over," he said.

In Alabama, an EF2 tornado damaged buildings in Fairfield, a town outside Birmingham, CNN affiliate WVTM-TV reported. Four people were taken to the hospital with what appeared to be minor injuries, the station said.

Cindy is expected to produce 3 to 6 inches of rain, with as much as 15 inches in some places, through Friday morning, the hurricane center said.

"The storm is expected to move up into Louisiana ... where it will be absorbed by an approaching cold front moving in from the Plains," Guy said.

Over the coming days, the cold front will push the remnants of the storm east and will help dump more rain over the Tennessee and Mississippi valleys.

The National Weather Service said all the warnings for coastal areas were lifted Thursday morning, but the storm has put millions of residents under high alert of "life-threatening flash flooding" since Tuesday and already has claimed at least one life.

A 10-year-old boy from Missouri died Wednesday after a log struck him outside a beachfront condo in Fort Morgan, Alabama, the Baldwin County Sheriff's Office said.

"The boy's father was outside but several feet away attending other children and noticed a huge wave was coming ashore heading toward the log and his son," Capt. S.K. Arthur said in a statement. "The wave hit the log knocking the log into and over his son."

"This is definitely the worst I've seen it so far. I had probably about (2 feet) of water," Jerry Rodriquez told WVUE. "If you live on the water, though, that's what's going to happen. You're gonna flood."

Parts of southern Alabama, southern Mississippi, southeastern Louisiana and western portions of the Florida Panhandle already have seen streets covered in up to 3 feet of water.

In Texas, the Coast Guard reported rescuing a shrimp trawler with a crew of four that was taking on water about 80 miles outside Galveston. A helicopter crew lowered a pump to the ship, which the trawler crew used to keep the boat from sinking, the Coast Guard said. The ship made it safely to port Wednesday morning.

Cindy is the second tropical storm to form during the Atlantic hurricane season, which began June 1. It's the third storm of the season, which got an early start with Tropical Storm Arlene in April.

Alabama Gov. Kay Ivey declared a state of emergency to "guarantee state resources are on standby and are ready to assist impacted communities if necessary."

"There's been a lot of rain in the area over the last three to four weeks, so the ground is pretty saturated," said Glen Brannan of Alabama's Mobile County Emergency Management Agency.

In Mississippi, Biloxi declared a state of emergency because of the flood risk. Residents in nearby counties were offered sandbags.

"It's kind of like a slow-motion disaster for us now," said Greg Flynn with the Mississippi Emergency Management Agency. "It's not wind, it's rain we're concerned about."