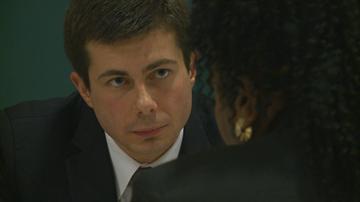 SOUTH BEND, Ind. – Dozens came out to the first “Mayor’s Night Out” meeting for the chance to speak face to face with Mayor Pete Buttigieg at the Charle's Martin Youth Center on Lincolnway West on Tuesday.

"I'm really proud of the face that anyone in the city who wants to give me a piece of their minds knows where they can find me," Buttigieg said.

Each of the 32 people who signed up to speak with Buttigieg got five-minutes to talk about any issue on their minds.  Gloria Gray was one of the first in line, wanting to discuss a problem with her home on Riverside Drive.  The city installed a median on the street right in front of her home.

“It makes it very difficult to get in and out of my driveway and in the winter time when the snow plows come, they pile the snow and I have a hard time getting out of my driveway," Gray described before her meeting with Mayor Buttigieg.  “I complained to the last administration, nothing was done about it and so I'm here this year hoping that the new mayor can come out and take a look at what it is that I'm hoping to be changed."

Tuesday’s meeting was the first of what Buttigieg is planning to be monthly meetings where citizens get the chance to discuss whatever issues are on their minds.

"We really covered a whole range, it was everything from issues related to streets to employment concerns people had, got a couple of compliments too, but mostly it was issues that people wanted action with and that's one of the reasons I brought the department heads," described Buttigieg.

Heads of various city departments were also on hand to talk to the citizens who showed up.  Buttigieg, who was sworn in as mayor at the beginning of the year, explained that the goal of the meeting was to make sure city leaders were in touch with what issues affect people.

“It’s way too easy, in that big office on the 14th-floor, to lose touch if you’re not going out and asking folks what’s on their minds,” he explained.  “It’s definitely a tricky balance, as mayor, you have to think about every issue from the smallest pothole to the biggest economic development project but you’re accountable for every one of them.”

Gloria Gray got her five-minutes with the Mayor Buttigieg, and said she was pleased with the results.

"It was positive, I spoke with him about my issues and he will be sending someone out to take a look at the problem and see what can be done," Gray described.  “There was a strong dialogue, eye-to-eye contact and big concern about what’s taking place.”

Buttigieg said in the coming days, he and other city leaders would discuss the topics raised and possible actions the city could take.

“Some of the things folks bring up aren’t things that I can fix overnight, sometimes somebody needs a job and I can’t fix that overnight,” Buttigieg described.  “But I can promise to give an accurate answer, I can promise to look into something, if there is a solution I promise to find it.”