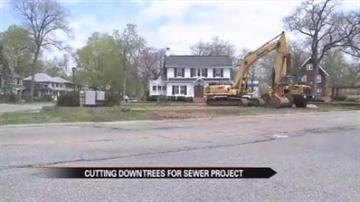 MISHAWAKA, Ind. -- The city of Mishawaka is cutting down over 50 eighty-year-old oak trees from “The Oaks” neighborhood because of a sewer project.

Twenty five years ago, Douglas Gray and his family moved to The Oaks neighborhood for the location, the people and the pristine landscaping.

"The yards that kept up with the trees, the whole atmosphere,” said Gray.

But now, where there once were towering oaks, there are now gaping holes.

"It's basically sickening to watch them go down,” said Gray.

In March, the city informed the neighborhood that they would be beginning the sewer outfall consolidation project.

The $2.7 million overhaul will bring Mishawaka sewers up to federal regulations.

The trees are casualties of the project.

"They say they're going to dig 20 feet down and destroy roots and basically killing the trees. If not soon, they'll be coming back in a couple years to take them down,” said Gray.

More than 50 trees are being removed from The Oaks neighborhood including the 7 or 8 that were already taken down from in front of Michael Haney's house.

"The kids used to play ball before they put this piece of artwork here,” said Haney.

Like Gray, Haney has lived in the neighborhood for more than 20 years.

He's passionate about the landscape and can't stand to see these 80 year old landmarks come down.

"Very tough. Very tough. Took away a lot of the shade and I'm just so out in the open. They were such tall beautiful trees and provided some privacy from the walk,” said Haney.

Residents say they support the sewer project and can’t stand in the way of progress.

The project began April 29th and is expected to be complete in December.