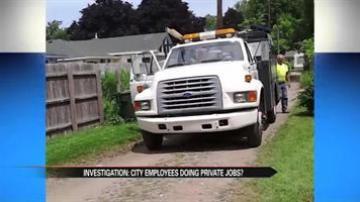 SOUTH BEND, Ind. -- A South Bend man took concerns about a city employee to the South Bend Common Council and now the allegations are being investigated. The citizen has pictures that possibly show city employees doing a job on the employees' personal property.

"The photos that show the city truck and what appears to be city workers in the yard working were passed on to me by the person that called me. There was a photo that I actually took of the new concrete that had been poured in the yard," said Davis.

Davis was notified by city attorney Aladean DeRose this week that the city's legal department is looking further into the allegations.

'I'm glad that obviously an investigation has been launched. How thorough it will be and what will happen I guess time will tell," said Davis.

Derose also asks for further information, including the identity of the person who took the photos.

The letter says, "If you have personal knowledge which you have not put in written form in which you believe the city should consider as part of its internal investigation please provide it to me in the form of a letter or notes."

City spokeswoman Kara Kelly issued the following statement, Issues raised during Privilege of the Floor at Common Council meetings are routinely investigated by City Legal and this claim is no exception. In accordance with policy, the City will not comment on an ongoing investigation.

The Indiana State Police says the department will not comment on an ongoing investigation.

Davis says that doesn't deter him. He believes he is doing the right thing by coming forward.

"Obviously that's a pretty generic statement that you as a news person probably hear all the time. And I guess it's just a matter of we'll have to wait and see how this all pans out," said Davis.

Davis says the neighbor wants to help with the investigation and will allow Davis to give his name and phone number to the city's legal department.