City has no immediate plans to demolish old brewery 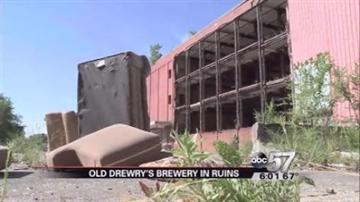 SOUTH BEND, Ind. -- The old production facility for a South Bend brewery is in ruins, but the beer itself is set to make a comeback. Drewery's closed its doors more than 40 years ago, but what's being done about the old building?

The old Drewery's plant on Elwood Avenue closed up more than 40 years ago. The building is in ruins and is being used as an illegal dumping site.
We reached out to the company that owns the building, but they said they haven't been in business in years.
Despite the building's condition, Brian Avery of B&C Auto Repair thinks it's worth saving.
"I don't what to see it go," said Avery.

He co-owns an auto repair service behind the plant.

"In the late 80s, this was a nice area back here. And now, it's telling me, the community doesn't have any respect for itself," said Avery.

Illegal dumping is just part of the problem.

The roof is caving in, which allows pools of toxic sludge to settle.

Any bit of copper wire was stripped long ago.

"Some of it is falling in, but that can be taken down. But there's other parts that are still good and can be preserved," said Avery.

Code enforcement says they've had issues with the building and its owner in the past.

But a lack of money prevents them from tearing it down. It would cost several million dollars to demolish the building.