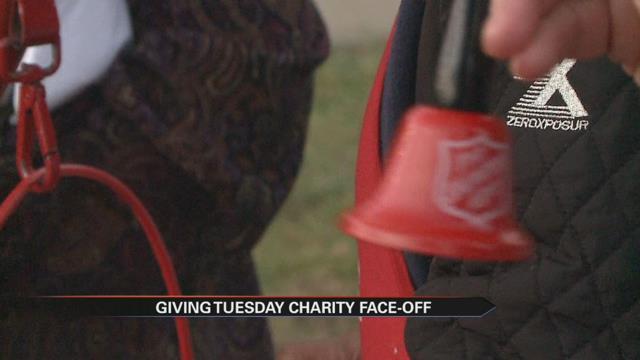 A familiar ring on this day of giving

A 12-hour battle between two cities

Leaders of Mishawaka and South Bend stepping up to the kettle to raise money for over 1,000 families in need in St. Joseph County.

Dave wood, the Mayor of Mishawaka, has been involved since day one.

“A little bit of bragging rights involved in it but the winners here are the citizens who are in need. That’s why we do this. While we try to make this in to a friendly competition, it’s all to help more and more families. That’s the goal here,” said Wood.

Meg Sauer is with the Salvation Army

“I think more than anything it raises awareness. Put a dollar in, it’s amazing the build up in the six weeks we have,” said Sauer.

The Salvation Army is the driver behind the local event, which is now in its fourth year.

For community leaders the friendly competition is all about ringing the bell.

“The community came out with donations to help people in need, that’s the most important thing,” said Cox.

Mishawaka won the 2016 battle by a close margin.