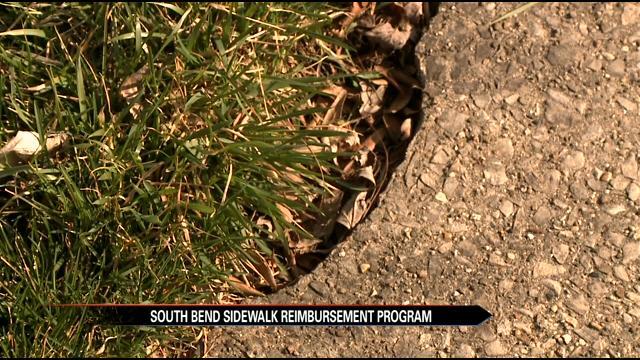 The City of South Bend is taking steps to fix an ongoing issue in neighborhoods - cracked and uneven sidewalks.

Just this week the city released a statement saying they will assist homeowners in paying for the replacement of neighborhood sidewalks.

One homeowner in the Broadmoor neighborhood in South Bend said she is thrilled the city is taking the initiative because the sidewalks are a problem she has to deal with every day.

“That's Erskine Plaza and we walk back and forth to our grocery store, our restaurants and that is one of the best things about this neighborhood,” said Valerie Kraus.

Kraus walks her three dogs daily, but there are some aspects of the neighborhood that Kraus wishes were better.

“If you wanted to redo this whole piece of sidewalk, that's a lot of money,” said Kraus.

There are parts of the walkway that need help.

Without the funds, residents in the area just cannot get the job done.

“A lot of us walk around, checked out, because we can't afford the thousands of dollars it takes to fix the sidewalks,” said Kraus.

The City of South Bend is stepping in offering a helping hand to homeowners like Kraus.

According to the city's press release, they have implemented a curb and sidewalk reimbursement program, “to assist property owners in making needed repairs to curbs and sidewalks.”

“It was really great to hear that they're working on helping us get some sidewalks that will help us enjoy our neighborhoods,” said Kraus.

The city is reimbursing residents $20 per linear foot for the sidewalk and $15 for curbs.

An average price to fix a curb is about $25 per linear foot, so that means the city would be covering over half of the cost.

Kraus said that still leaves her with a hefty bill.

“It's really hard for your average person, it's going to be hard to come up with half, let's face it,” said Kraus.

Kraus knows these sidewalks are one of the few eyesores in her neighborhood.

The city is also offering $950 for the construction of accessible sidewalk ramps for certain properties in the city.