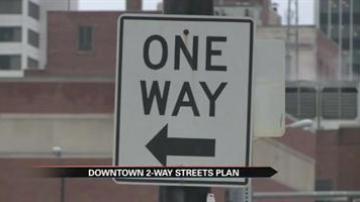 SOUTH BEND, Ind. -- The two way street project in South Bend is full speed ahead, but the city is still at least a year away from the plan becoming a reality. The project is in the design phase which is expected to take a couple of months.

A city memo lays out the timeline for the Smart Streets Initiative.

The city hopes to break ground as early as July.

First, the city plans to convert Lafayette Street to a two-way.

There will be "bulb outs" or narrow cross walks so pedestrians have a shorter distance to travel while crossing the street.

Some new landscape changes are planned, including six blocks of trees.

Phase one will cost around $700,000 and is expected to be complete next October.

After that, the city plans on converting Jefferson Boulevard.

The bidding for that, the second phase, will happen next October right after Lafayette is complete.

Right now there are four phases, but only three have a proposed schedule.

City officials say these next few months are key for meeting those suggested deadlines.