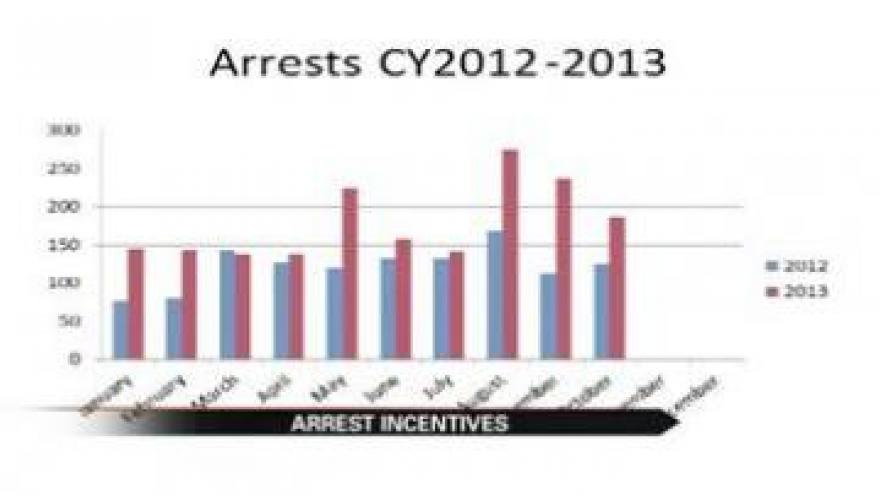 BENTON HARBOR, Mich. -- In the last three months, public safety officers in Benton Harbor have made nearly twice as many arrests this year as they did this time last year. ABC57 found out the officers are getting incentives for making arrests, but they aren't monetary incentives.

Deputy Director of Benton Harbor Police Services Daniel McGinnis showed ABC57 data that shows arrests are up and crime is on its way down. He admits there is an incentive program, but it does not involve money.

"Last year, 2012 we had 55 home invasions. That's preposterous. That can't happen. This year, we have seven thus far," said McGinnis.

Arrests are at an all time high in Benton Harbor.

McGinnis says he kicked off an incentive program for officers, but money definitely is not the motive,

In fact he says the department is working with less money than before.

"Let's be honest, our officers have really lost a lot as far as pay cuts one of the things I wanted to do was help raise morale," said McGinnis.

That's where his Employee of the Month program comes into play.

"Really all they get is a parking spot in front of the building and a nice email from me. There's no bonuses there's no gift certificates there's none of that," said McGinnis.

This August there were about 150 more arrests than there were last August.

McGinnis says there's a new philosophy in the police department of being proactive, not reactive. He says it seems to be working.

"Other people see that it's not as free to break in houses, fight, shoot, as it may have been before," said McGinnis.

That is a welcome change for residents.

"I think they are getting a message across. Won't tolerate a lot of what's been going on around here and their presence is keeping the peace but obviously they have a lot of work to do," said Marshawn Porter of Benton Harbor.

McGinnis says he agrees with that statement. There's still a lot of work to be done, especially with the winter months coming. He says that's usually when they see the most home invasions.