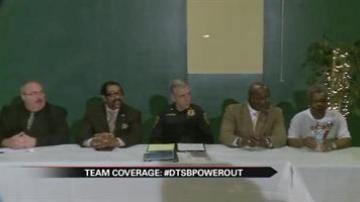 SOUTH BEND, Ind. -- The city of South Bend has created a new team to help combat violence. The group held its first "call-in" and invited over 20 members of South Bend gangs and groups to hear an important message from the city.

The group, South Bend Group Violence Intervention, sent a strong message Thursday night that outlined the harshest of punishments for the gang that breaks the law first.

"We've been wrong-and I'll stand before you like I did the gentleman last night and apologize on behalf of the police department," said Captain Scott Ruszkowski, Uniform Division Chief, South Bend Police Department.

Ruszkowski apologized for the violence- and for the six homicides that have shaken the city in just the past four months.

"I'm sorry but what we've done to stop the violence and the shootings hasn't worked," said Ruszkowski.

The South Bend Group Violence Intervention panel did some research and called in key members of some of the hardest-hitting street groups.

"We're particularly focused on those representatives of the groups that we find to be the most violent," said South Bend Police Chief Ronald Teachman.

In attendance were 21 people who are currently on probation or parole. Police asked them to take a message back to the streets.

"What you're doing is hurting us. The gun violence in our city is wrong- it has to stop- and it' hurting us. We will help you if you let us. As a community, law enforcement, services, clergy - everyone. And the last is we will stop you if you make us," said Dominic Zultanski, Operations Manager, South Bend Group Violence Intervention.

It's now up to those 21 men to take the message back to the streets and spread the word.

Now the word is this, police will leave your gang alone if you don't cause any violence, but the first gang that's linked to the next shooting will get the full consequences of the law.