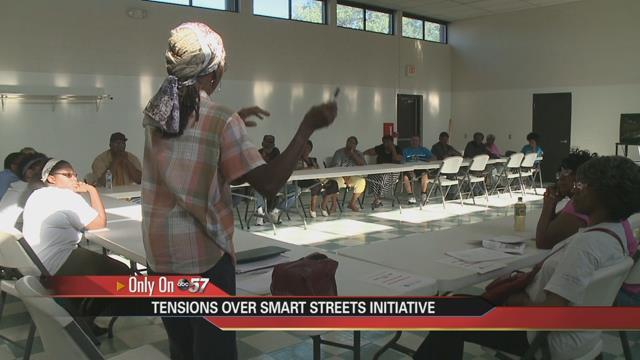 The battle for Western Avenue continues.

Tensions are high after months of heated conversations between the city of South Bend and some west side residents.

Tuesday, both sides attended public meetings to address concerns about the construction project to fix up Western Avenue.

The city is ensuring residents changes to locations like Western Avenue and Lincolnway are in no way political.

It’s about safety, and that was the theme of the think tank meeting they held at the Studebaker Museum.

But some residents disagree.

Some community members say they're worried the construction will change the area and increase property taxes.

They met Tuesday night as well, with Councilman Henry Davis Jr. to voice their concerns about being left behind in this initiative’s push to move the city forward.

It’s yet another battle for long time South Bend resident Collier as she and other west-siders met Tuesday to voice their concerns for an area, they say, they’re losing to the city.

“I’m surrounded by it, but yet I’m not included in it and so then what is that going to do then to my taxes?” said resident Tony Trinca.

South Bend resident Trinca is surrounded by the city’s “West Side Main Street Plans” for Western Avenue, the topic for this neighborhood meeting led by Councilman Davis Jr.

It was also a topic for the city’s focus group Tuesday evening.

“How can we add bike lanes or on street parking? Really right sizing the street for the traffic that it generates,” said Jitin Kain, Director of City Planning.

The city sought feedback on the "Smart Streets Initiative" and addressed concerns some residents had about the city’s intentions.

“This is not a political thing, if anything it’s about making it safer for all different users,” said Kain.

But for some residents, they just want their voices to be heard.

“Make it right, make it good for everyone involved," said Collier. "We live out here.”

The neighborhood group says their next plan of action is to address the city’s common council.