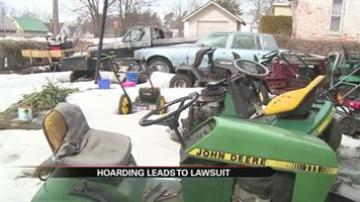 GOSHEN, Ind. -- The mayor of Goshen is fed up with one resident who has allegedly been violating city building codes for years. The resident owns several properties in the city and uses one as a junk yard. The city has given him several chances, but the mayor says there are no more second chances.

From Bathtubs, to lawn mowers there's a little bit of everything at the property on North Fifth Street.

"I thought we would be able to clear it by that time but no one had anticipated the amount of snow and the extreme cold weather that we ended up getting," said Ron Davidhizar, who owns the property.

The mayor isn't buying the story.

He says the city has been asking Davidhizar to clean up his property for years.

The city of Goshen gave Davidhizar a number of chances, starting as far back as August of 2012, when they gave him one year to clean up the house.

They are still waiting.

Now they are taking him to court.

Davidhizar says suing him won't make the issue any easier to fix.

"That will just mean much less money to spend on repairing and refurbishing houses and other property," said Davidhizar.

Davidhizar says he has every intention of getting the property cleared out as early as this week.