City unsure what to do with Pucker Street dam 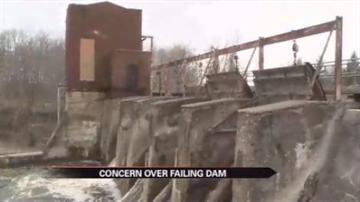 NILES, Mich. -- The city of Niles is trying to figure out what to do about the Pucker Street dam on the Dowagiac River. It’s more than 80 years old, but removing it will be costly and keeping it may not be an option.

As spring approaches, there is concern about how much pressure the dam can withstand.

Just a few years ago, heavy rainfall prompted an evacuation for nearby homeowners.

Tim Davis says the Pucker Street Dam on the Dowagiac is one of the best spots around for fishing.

“Once you get addicted to fishing, you’re down here,” said Davis.

He’s been fishing there for years.

When he found out the dam could fail, he realized he would have to find another fishing spot.

“We might have to find another one. I don’t know how that would work,” said Davis.

A recent study by the U.S. Fish and Wildlife Service placed the dam at the top of their list for suggested removals in the St. Joe River watershed.

It used to generate electricity, but now it sits vacant.

“They’re actually becoming liabilities for communities and hazards if they were to fail,” said Marcy Colclough, senior researcher with the Southwest Michigan Planning Commission.

Colclough says dams like the one on Pucker Street are outdated and costly to remove.

A similar project a few miles upstream cost over a million dollars.

“It always takes local resources, and that needs to be a part of it too, but right now, there is federal and state money available to do these dam removals,” said Colclough.

With spring rains fast approaching, time, money and options are limited for cities like Niles.

We tried reaching out to the city of Niles to see what steps they planned to take, but no one was available to give any comment.