City worker refuses to take seniors yard waste; it needs to be closer to the curb 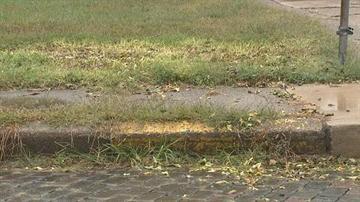 SOUTH BEND, Ind. – A city worker refused to remove a senior woman’s yard trash Wednesday, even though it was properly bundled and near the street. The worker told the woman, who needs the assistance of a walker to move about her home, the bundles were not close enough to the curb.

A patch of discolored grass is all that was left of the mess Wednesday afternoon. The branches had been taken, but not before several phone calls and complaints were made.

The woman, Mertice Jones, has lived in the home since April of 1956. She and her husband raised 34 children; nearly all of them foster kids, in the home. Eight of the kids were raised for several years.

Since her husband died, Mertice’s ability to walk has degraded to the point where she can no longer do many chores herself. That doesn’t stop her from having a presentable home inside and out.

Jones often pays for help maintaining her yard, and when she has yard waste that needs to be taken away, she always puts it on the edge of her grass, right next to the sidewalk. There is no easement between the street and the sidewalk.

Usually she doesn’t have a problem with trash pick-up taking the bundles of yard waste. But last Wednesday several bundles of branches were not taken. She resolved to make sure the city workers took them this week and waited for them to arrive.

Jones says, the worker shrugged and said, “Okay” before getting into his truck and leaving with the branches still sitting on her lawn.

A few minutes later, once Jones realized the workers were serious about not taking the bundles, she called the city and was transferred to Henry Davis, Jr., her council member.

Davis says he was livid when he heard what had happened. He immediately got on the phone and tried to rectify the situation. Within an hour, the workers returned to Jones home and removed the bundles of branches.

Davis says the worker’s actions are unacceptable. “I should not have to call a supervisor, to have a supervisor call their workers, to see if they’re doing their job. That’s not what we’re getting paid to do,” said Davis.

Davis says, this is not an isolated incident, and indeed it is not. Another resident on the same street watched the workers skip his home completely, Wednesday morning. His trash bins were still full when he returned home from work around 11:00 p.m. that evening.

Davis says these are the sort of things the public needs to tell their council members about, and the kinds of things that need to be brought up in budgeting discussions currently underway at the city.

Meanwhile, Jones is just happy the branches are gone. They have already discolored a patch of her lawn and she has been waiting for them to be removed so she can have the rest of the shrubbery trimming done. Ironically, she didn’t want to leave too much for the city workers to have to pick up all at once.