CJ Sanders: Star on the field, star on the big screen 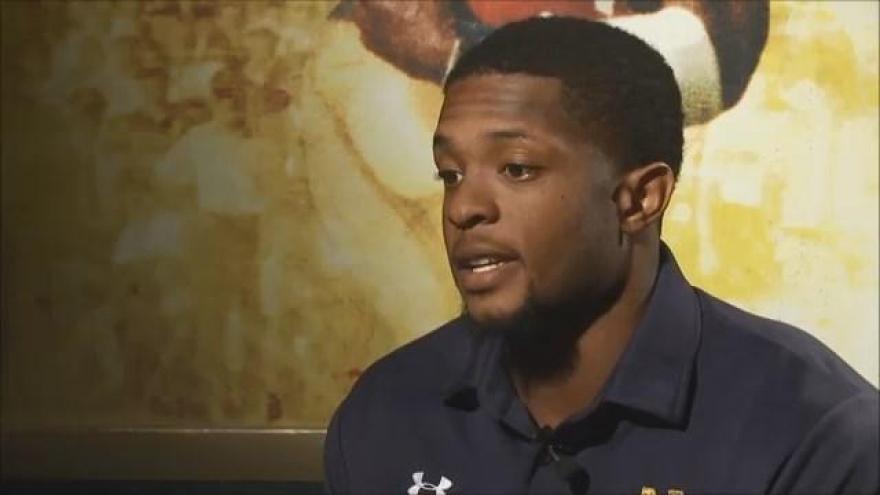 You may know C.J. Sanders as one of Notre Dame's best receivers and kick returners but years ago he was also quite the star on screen.

Without question Sanders is a big star on the field.

Just one look at the film shows you last year's special teams standout has now turned into a go-to target for DeShone Kizer.

But off the field he's also a big star and he's got the film to prove that.

Before Sanders ever studied a playbook, he was studying lines.

He had his first big break playing Ray Charles in the Oscar winning film Ray.

"You know for Ray, I had to do a lot for a 6 year old. I had to wear contacts, I had to learn piano, they kind of went over braille with me, I had to go to a blind school and hang out with them so it was a long process," said Sanders.

"Jamie has given me a lot of advice, the biggest thing is lay out your work for others.  Whereas, work hard so your actions speak louder than your words," said Sanders. "it's kind of hanging out at his house and being there and kind of seeing how he treats others So, he's a big mentor for me and I'm thankful for him."

Sanders' role in Ray earned him awards and took him to places he could have never imagined.

The movie Ray launched Sanders' career and by the time he hit middle school, he had roles in 5 TV shows, including Grey's Anatomy and in 4 films, including First Sunday.

Now Sanders is 19-years-old and is starting to realize that football takes the same amount of preparation and focus.

"Ever since I was little, I loved football, so on the set, Jamie kind of helped me as comparing football to acting. The level of focus it takes to be prepared. So even growing up, you know, acting, learning my lines things like that, kind of helped me translate to football as far as learning my playbook," Sanders said.

And one play he keeps going back to is how to control his emotions in tough situations.

"So acting, for Ray I had to cry on cue. In football I have to let my emotions out as far as my team mates, being that voice. So it correlates and I'm thankful that I did acting when I was younger and I can kind of translate to the field," Sanders said.

As he pursues his football dreams now, he hopes to someday get back into acting and in a perfect world, the two would become one.

"My dream role would be in a football aspect, like a Friday Night Lights type movie, because in some roles the actors have to have a double for the football portions of it but I feel like I will be able to play myself and football scenes and things like that. So something that is playing a guy who is a football player and living that day to day life," Sanders said.

Everyone always assumes Sanders is in the film and television program at Notre Dame but he said acting comes naturally. He wanted to push himself so he is working on a degree in the Mendoza School of Business.