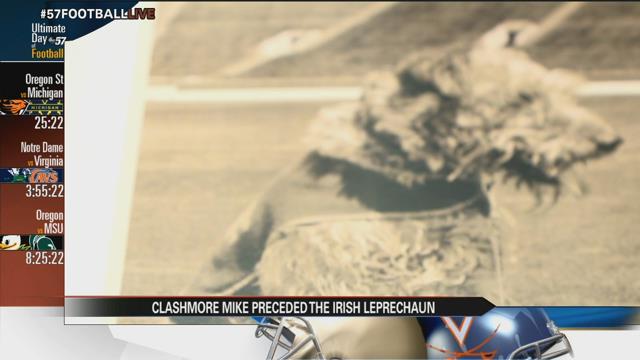 There were a few famous figures that gave Notre Dame fans spirit every time they entered the stadium.

When it comes to Notre Dame, the Fighting Irishman or leprechaun, is typically the figure you associate with this team's luck.

Younger football fans might not know there was another famous mascot for this school and he had quite an attitude to match this team’s fighting spirit.

A vintage staple in Notre Dame’s history is now remembered in one of South Bend’s largest memorabilia shops.

“We have a lot of people that come in and request something to do with Clashmore Mike,” said Jim Augustine, owner of Augie’s Locker Room.

It's a high demand for the Fighting Irishman mascot's predecessor that never backed down from a fight.

The former mascot was an Irish Terrier known to get the fans to rise up during the games by getting a rise out of their rivals.

“It was trained to go around during half time and lift its leg on the opponent’s bench and anything to do with the opponents,” said Augustine.

And although he was replaced by the mid 60’s, his furry legacy will always be archived in this store and in the hearts of many true Fighting Irish fans.

“It was special to have a dog like this an Irish Terrier was their mascot,” said Augustine.

The Irish Terrier might have been the mascot for this school since the 1920’s but Clashmore Mike debuted in 1934.