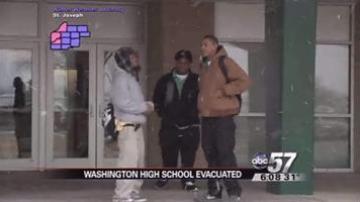 Students and staff at the school said they smelled gas.

Shortly after, crews from the fire department arrived at the scene to investigate.

By 1:45 p.m., emergency responders decided that everything was okay and sent everyone back inside.

As of 2:15 p.m., NIPSCO was on the scene and said they think the smell came from a nearby excavation project.