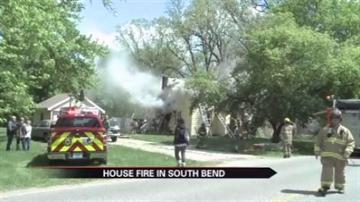 SOUTH BEND, Ind. --  Clay Fire had their hands full with a residential fire that lasted more than four hours.

Smoke poured out of the windows and roof of the home.

Neighbors say the fire started with just a few embers.

But it wasn’t safe to leave, because when the homeowner returned his house was engulfed in smoke and a dozen fire trucks from five different townships were already hard at work.

“A passerby saw smoke coming from the side of the house and along the chimney area. When we arrived on scene there was smoke coming out of the chimney and attic area,” said Clay Fire Deputy Marshal Ron Melser.

“The upstairs, the attic area is a total loss and the second floor has a lot of water damage,” said Melser.

It was not easy to put out. Even with five different fire departments, it burned for more than four hours.

The Fire Chief says one of the challenges was the age and structure of the home.

There are no hydrants on Lilac Road, so water tankers from several different fire departments had to be brought in.

Next door neighbor Gary Lamberti says he feels bad for his neighbor having to watch his home burn.  He says he hopes everyone can learn a lesson from this home owners small mistake.

“Never leave fires unattended and make sure you check your chimney,” said Lamberti.

The homeowner did not want to appear on camera, but he did tell neighbors he is stunned that this happened and he does have insurance.