Cleaning Benton Harbor for the PGA 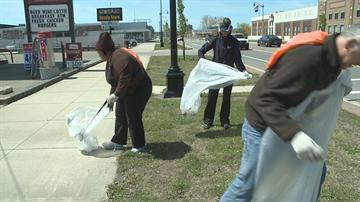 BENTON HARBOR, Mich. - Friday was the test run for a big cleanup.

Volunteers hit Main Street determined to make the Benton Harbor look good. First in their sites was the Blossom Time parade, but they really want to make the city look good for the Senior PGA Tournament in May.

"We want to make sure we can operate as effectively as possible on the major clean-up day," said Christine Schraf. Schraf is on the Community Showcase Committee, a group of volunteers trying to maximize the PGA’s impact on Southwest Michigan.

About 20 cleaned up Friday but more than 300 volunteers will be on hand to clean May 17th and 18th.

The committee is focusing efforts on the routes in Benton Harbor where most eyes will be looking."It's a beautiful area and we want people to see how beautiful it is,” said Schraf.

Crews will clean up Pipestone Avenue and M-139, two major thoroughfares to the golf course from I-94.

They'll also hit Main Street and Riverview Avenue, where the tourists will be shuttled around.

"They need to cleanup in the hood," said Benton Harbor resident Sherron Wilder. Wilder runs a homeless transitional home on Vineyard Street. "It's going to be a worldwide thing for us,” she said. “We're going to get national attention."

Wilder thinks it would be a good idea to clean the entire city, including neighborhoods off the main roads. "The media is not just going to show the good side of Benton Harbor they're going to show the bad sides too," she said.

"If we have more volunteers than we're expecting we'll have some scope creep and we'll expand the area," said Schraf. They are only expecting 300 volunteers.