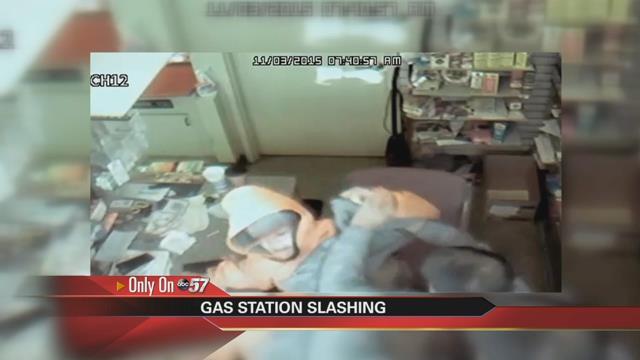 Police released surveillance video of a clerk being attacked Tuesday morning while he helped out at his family's business. The man was taken to the hospital after a woman with a knife robbed the Mobil Exxon on Cassopolis Street in Elkhart.

The Sial family owner the gas station and says they know working in the business can be dangerous at times. That is why they had the uncle working in the morning.

Now they are just hoping that the surveillance video they have will help police catch a criminal.

The surveillance taken at the Mobil Exxon on Cassopolis Street in Elkhart says 7:39 a.m. At that time a woman with an orange hooded sweatshirt enters the gas station.

About two minutes later you can see the same woman dressed in orange behind the register, wrestling with an employee.

“When I came in it was blood all over and this over here all fell off,” says Chad Sial part owner of the gas station.

Chad describes the mess he walked into Tuesday morning after the employee who is his uncle called for help.

Iqbal Sial is the name of the man attacked. Hours after the ordeal he was gratefully smiling after being let out of the hospital with a small cut on his neck and a few stitches on his hand.

“He grabbed the knife and got injured and was bleeding,” says Nausher Sial another owner of the family business.

Nausher is Iqbal’s brother and translated for him.

“She put the knife on his neck and she said give me money,” says Nausher.

The suspect is described as a white female with brown hair with an unknown tattoo on her lower back. She cleaned out the register before running outside and fleeing in another vehicle.

“Was this the first time something like this happened here?” asked ABC57.

“This is the first time,” says Chad.

The scary incident happened in a matter of minutes with every second caught on camera.

This gives the Sials hope that the suspect will be caught and their sense of security will be returned.

“Here is no problem Elkhart is fine but you never know. Having the surveillance gives us a sense of satisfaction having everything recorded,” says Nausher.

The Sials say the woman said she was stealing for her child. They say they understand what it is like to have to provide for your family but not at the expense of someone's life.

If you have any information regarding the armed robbery you can contact the Elkhart Police Department.