Cleveland braces for protesters during RNC 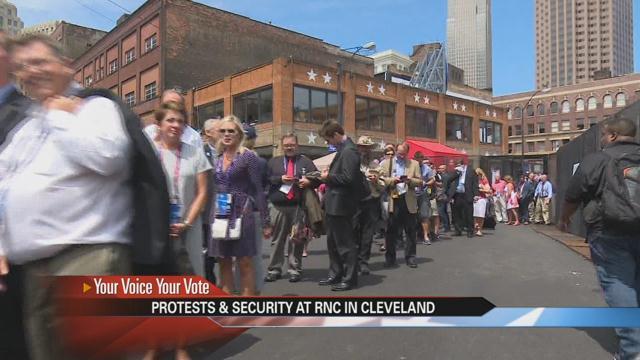 Weeks of unrest across the nation has Cleveland in the spotlight tonight.

Several police departments around the country are patrolling the Republican National Convention this week in order to keep peace.

It was peaceful in Public Square where there were more demonstrations than protesting happening.

Quite a few people on both sides took to this center - the designated area for protests to voice their opinions peacefully.

“I represent the cause of freedom."

"Let's come together and stop being nasty"

They're just three of many voices raised blocks away from thousands of ears.

"I'm out here exercising what they call democracy and freedom of speech,” said Nappier, Co-founder of New Black Democratic Party

And the many cops on standby welcome their speech so long as it stays peaceful.

"Certainly if something were to happen they'll be able to step in,” said Raymond, a protestor there.

In preparation for the expected large crowds of protesters, the city of Cleveland had to get creative. Creative, like using snow plows as barricades.

"…and looks like the setup is really good. I haven't seen any problems whatsoever,” said William Gordon, a Michigan resident.

Maybe no problems, but the venue did see more officers on alert.

Side effects of this heightened sense of security are longer wait times and longer lines that went on and on for several blocks. But this inconvenience at least assured some they would be safe.

"I try to be optimistic about that kind of thing. I'm all for free speech and such and I assumed they would do a good job with security,” said Gordon.

Quite a few Indiana Police Departments are patrolling this week and one officer says there are a few South Bend officers present as well.