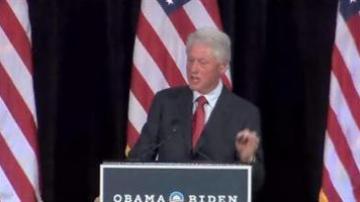 In front of a crowd at Miami’s Florida International University, Clinton defended the president's record on issues like the economy, the federal budget, and health care.

He also hit back against Republican claims that the president "robbed" funding from Medicare.

Mitt Romney claims President Obama made $716 billion in cuts to Medicare to pay for his health care plan. Democrats say that's not true.