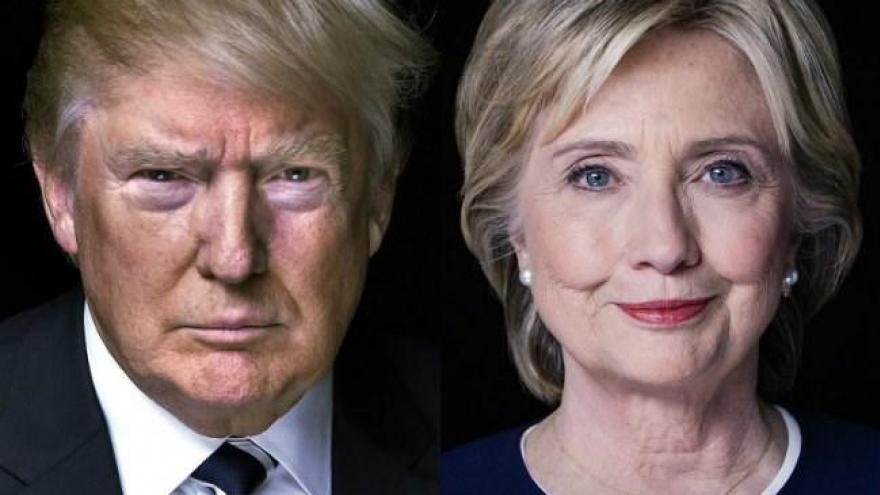 Donald Trump will win Kentucky and Indiana, CNN projects based on exit polls, and Hillary Clinton will win Vermont.

History will be made in America tonight.

Either Hillary Clinton will be the first woman to become president in the nation's 240-year history or Donald Trump will score an unprecedented upset for outsiders and repudiate the Washington establishment in ways not seen in generations.

Both candidates argue the election presents an unusually significant choice for a divided nation. Democrats warn that Trump, with his rhetoric on race, gender and immigration, would represent a rejection of core American values. Trump insists his outsider campaign represents America's last chance to drive out a corrupt political establishment that has turned its back on hard-working Americans.

Polls will begin closing on the East Coast over the next two hours and long lines have been reported in much of the country.

New York is the center of the political universe this Election Day. This is the first campaign since 1944 in which both candidates are from the Empire State. And their victory parties are being held a mile and a half apart in Manhattan.

Clinton appears to have the easier route through the electoral map to the 270 votes needed to win the presidency. She is counting on minority voters and highly-educated white women to take her to victory. Trump is hoping a huge turnout from his less well-educated, less diverse coalition will defy pollsters who give Clinton a small but steady lead nationally and are projecting tight races in some swing states.

At her last rally, past midnight in North Carolina, Clinton capped her campaign with the words "Love trumps hate."

Trump took to Fox News on Tuesday morning to declare he was confident about the outcome.

"We're going to win a lot of states. Who knows what happens, ultimately, but we're going to win," he said. The GOP nominee also took aim at polls showing that Clinton has the advantage.

Trump also appeared to be laying the groundwork for a legal challenge in the event of a close race. His campaign sued Clark County officials over an alleged decision to keep early voting polling stations open two extra hours. The lawsuit targets the greater Las Vegas area, which has large minority precincts.

The GOP nominee sent conflicting signals about his willingness to accept the result if he loses, telling News Radio 610 WTVN in Ohio that he would see what happens.

"You hear so many horrible stories and you see so many things that are wrong. So we'll take a look. Certainly, I love this country and I believe in the system, you understand that," he said.

"Years from today, when your kids and grandkids ask what you did in 2016, when everything was on the line, I want you to be able to say that you did vote," Clinton told a crowd of thousands in Philadelphia. "You voted for an inclusive, big-hearted, open minded country. (A) future that will make sure that we all keep moving together. Because I do believe we are stronger together. And you voted for an America where we build bridges, not walls."

In Scranton, Pennsylvania, Trump said Clinton is a "failure."

Path to the presidency

The Democratic nominee must hang onto traditionally Democratic states such as Michigan, Pennsylvania and Wisconsin, exploit her advantage among minorities and highly educated voters to win states like Virginia, Colorado and Nevada, and pick off several swing states where she is locked in a tough race with Trump.

Trump likely will need North Carolina, Florida and Ohio, all of which are races within the margin of error. And then he must make an almost perfect run through battleground states such as New Hampshire and Iowa. Even then, he will likely have to find a way to snatch away a state from Clinton's firewall. If he fails to take North Carolina or Florida, he will need Rust Belt wins from Pennsylvania and Michigan.

Clinton goes into Election Day with a 4-point national lead in CNN's Poll of Polls and an advantage in many battleground states.

Democrats are encouraged by indications of a surge of Hispanic voters in early voting in Florida and Nevada. But there also are warning signs for Clinton, with African-Americans not as large a proportion of the early-voting electorate as they were for President Barack Obama in 2008 and 2012.

While the focus will be squarely on the two rivals as the results roll in on Election Day, Obama took his place in the spotlight Monday. He campaigned furiously for his former Democratic political rival, apparently enjoying one of his last chances as president to replicate the soaring speeches of his 2008 campaign.

Obama introduced Clinton in Philadelphia during a speech that served as a symbolic passing-of-the-baton against the backdrop of Independence Hall.

"We now have the chance to elect a 45th president who will build on our progress, who will finish the job ... who is smart, who is steady and who is tested," Obama said. "She will work, she will deliver. She won't just tweet."

The President said he was counting on Americans not to elect Trump on Tuesday.

"America, I am betting on you one more time," Obama said, predicting the nation would "reject fear" and choose hope.

Michelle Obama, who has used her popularity to become perhaps Clinton's other most powerful surrogate, called on Democrats to turn out in huge numbers to prevent Trump from becoming president.

"This election is on us. It is in our hands," she said. "If we get out and vote tomorrow, Hillary Clinton will win."

The presidential election is not the only close race that will wrap up on Tuesday. Democrats are battling to grab back the Senate from Republicans. The GOP, meanwhile, is expected to hold onto the House of Representatives, but likely with a reduced majority.

House Speaker Paul Ryan said Monday that he would run again for the top job, despite reports in recent days that he may opt out or that more radical members of his restive caucus could try to oust him, after deeming him insufficiently supportive of Trump.

"I am going to stay -- you know why? Because I moved our majority to put out a very specific and coherent agenda. We have it, we're running on it," Ryan said on the Charlie Sykes radio show.

Asked who would win the presidential race, Ryan said he genuinely did not know, because "it is such a weird election, such a volatile election."