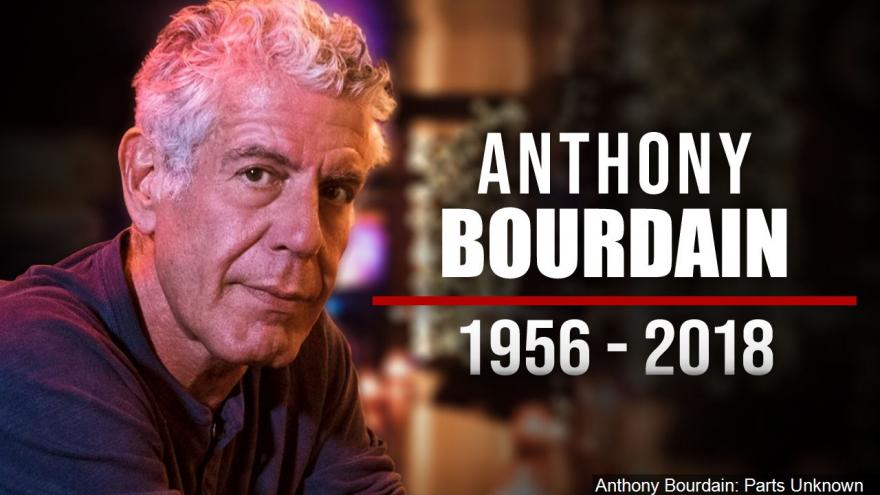 (CNN) -- In death, as in life, Anthony Bourdain brought us closer together.

On his award-winning series, "Parts Unknown," Bourdain brought the world home to CNN viewers. Through the simple act of sharing meals, he showcased both the extraordinary diversity of cultures and cuisines, yet how much we all have in common.

Tragically, he proved this again on Friday. Bourdain's death shook television viewers around the world. The most common sentiment: "I feel like I've lost a friend."

Bourdain was a larger-than-life figure -- a gifted chef and storyteller who used his books and shows to explore culture, cuisine and the human condition.

"Tony was a symphony," his friend and fellow chef Andrew Zimmern said Friday.

The news of Bourdain's death was met by profound sadness within CNN, where "Parts Unknown" has aired for the past five years. In an email to employees, the network's president, Jeff Zucker, remembered him as an "exceptional talent."

"Tony will be greatly missed not only for his work but also for the passion with which he did it," Zucker wrote.

CNN said Bourdain was in France working on an upcoming episode of his award-winning CNN series, "Parts Unknown." His close friend Eric Ripert, the French chef, found Bourdain unresponsive in his hotel room Friday morning. He was 61 and took his own life.

"Anthony was my best friend," Ripert tweeted. "An exceptional human being, so inspiring & generous. One of the great storytellers who connected w so many. I pray he is at peace from the bottom of my heart. My love and prayers are also w his family, friends and loved ones."

Viewers felt connected to Bourdain through his fearless travels, his restless spirit and his magical way with words.

"His talents never ceased to amaze us and we will miss him very much," CNN said in a statement. "Our thoughts and prayers are with his daughter and family at this incredibly difficult time."

"My heart breaks for Tony Bourdain," she wrote on Twitter. "May he rest in peace now."

President Donald Trump extended his condolences to Bourdain's family on Friday morning. "I enjoyed his show," Trump said. "He was quite a character."

Former President Barack Obama recalled a meal he shared with Bourdain in Vietnam while Obama was on a trip through Asia in 2016 -- an encounter captured in a "Parts Unknown" episode that year.

"'Low plastic stool, cheap but delicious noodles, cold Hanoi beer.' This is how I'll remember Tony," Obama posted to Twitter on Friday. "He taught us about food -- but more importantly, about its ability to bring us together. To make us a little less afraid of the unknown. We'll miss him."

For the past year, Bourdain had been dating Italian actress Asia Argento. She remembered Bourdain as someone who "gave all of himself in everything that he did."

Last year, he advocated for Argento as she went public with accusations against disgraced Hollywood producer Harvey Weinstein. "He was my love, my rock, my protector. I am beyond devastated."

After #MeToo, Anthony Bourdain stood 'unhesitatingly and unwaveringly' with women

Suicide is a growing problem in the United States. The US Centers for Disease Control and Prevention published a survey Thursday showing suicide rates increased by 25% across the country over nearly two decades ending in 2016. Twenty-five states experienced a rise in suicides by more than 30%, the government report finds.

'The Elvis of bad boy chefs'

Bourdain was a master of his crafts -- first in the kitchen and then in the media. Through his TV shows and books, he helped audiences think differently about food, travel and themselves. He advocated for marginalized populations and campaigned for safer working conditions for restaurant staffs.

Along the way, he received practically every award the industry has to offer.

In 2013, Peabody Award judges honored Bourdain and "Parts Unknown" for "expanding our palates and horizons in equal measure."

"He's irreverent, honest, curious, never condescending, never obsequious," the judges said. "People open up to him and, in doing so, often reveal more about their hometowns or homelands than a traditional reporter could hope to document."

The Smithsonian once called him "the original rock star" of the culinary world, "the Elvis of bad boy chefs." His shows took him to more than 100 countries and three networks.

While accepting the Peabody award in 2013, Bourdain described how he approached his work.

Friends and acquaintances remembered Bourdain's curiosity for the world's variety of cultures and cuisine rubbing off on them.

Chef and writer Edward Lee, who hosted a season of a show produced by Bourdain, looked back at their time working together and wrote that "Tony gave us a world that we didn't know we needed."

Others who fondly recalled their interactions with Bourdain included author and humorist John Hodgman, who recalled eating with Bourdain some 14 years ago.

"He was big even then, but he took time to sit with me in Chinatown to talk 'weird' food for a magazine piece I was writing. He taught me that our 'weird' is the world's delicious," Hodgman wrote on Twitter. "We ate chicken feet. The afternoon vibrated with life. RIP."

Chef Gordon Ramsay said Bourdain "brought the world into our homes and inspired so many people to explore cultures and cities through their food."

From 'happy dishwasher' to addiction to fame

Bourdain grew up in Leonia, New Jersey, and started working in kitchens in his teens -- including on Massachusetts' Cape Cod during the summer.

It was during those early jobs, he said, that he began using drugs, eventually developing a heroin addiction and other problems that he later said should have killed him in his 20s. He often talked of his addiction later in life.

"Somebody who wakes up in the morning and their first order of business is (to) get heroin -- I know what that's like," Bourdain said in a 2014 "Parts Unknown" episode highlighting an opioid crisis in Massachusetts.

After spending two years at New York's Vassar College, he dropped out and enrolled in culinary school. He spent years as a line cook and sous chef at restaurants in the Northeast before becoming executive chef at Manhattan's Brasserie Les Halles.

A different passion -- his writing -- helped put him on the map by his early 40s.

He published two suspense novels before drawing widespread public attention with his 1999 New Yorker article, "Don't Eat Before Reading This." The article was about the secrets of kitchen life and shady characters he encountered along the way.

"In America, the professional kitchen is the last refuge of the misfit. It's a place for people with bad pasts to find a new family," he wrote.

The article morphed into a best-selling book in 2000, "Kitchen Confidential: Adventures in the Culinary Underbelly," which was translated into more than two dozen languages.

"When the book came out, it very quickly transformed my life -- I mean, changed everything," he told NPR.

Bourdain found himself on a path to international stardom. First, he hosted "A Cook's Tour" on the Food Network, then moved to the Travel Channel with "Anthony Bourdain: No Reservations," a breakout hit that earned two Emmy Awards and more than a dozen nominations.

In 2013, both Bourdain and CNN took a risk by bringing him to a network still best known for breaking news and headlines. Bourdain quickly became one of its principal faces and a linchpin of its prime-time schedule.

Season 11 of "Parts Unknown" premiered last month on CNN, with destinations including Uruguay, Armenia and West Virginia. The series has been honored with five Emmys.

In his final weeks, Bourdain said he was especially looking forward to an episode about Hong Kong, which aired Sunday.

He called it a "dream show" in which he linked up with longtime Hong Kong resident and cinematographer Christopher Doyle.

"The idea was just to interview him and maybe get him to hold a camera. He ended up being director of photography for the entire episode," Bourdain told CNN in April. "For me it was like asking Joe DiMaggio to, you know, sign my baseball and instead he joined my Little League team for the whole season."

The show's website on Friday posted an homage to Bourdain featuring one of his many oft-repeated quotations -- one that seemed to embody his philosophy: "If I'm an advocate for anything, it's to move. As far as you can, as much as you can. Across the ocean, or simply across the river. Walk in someone else's shoes or at least eat their food."