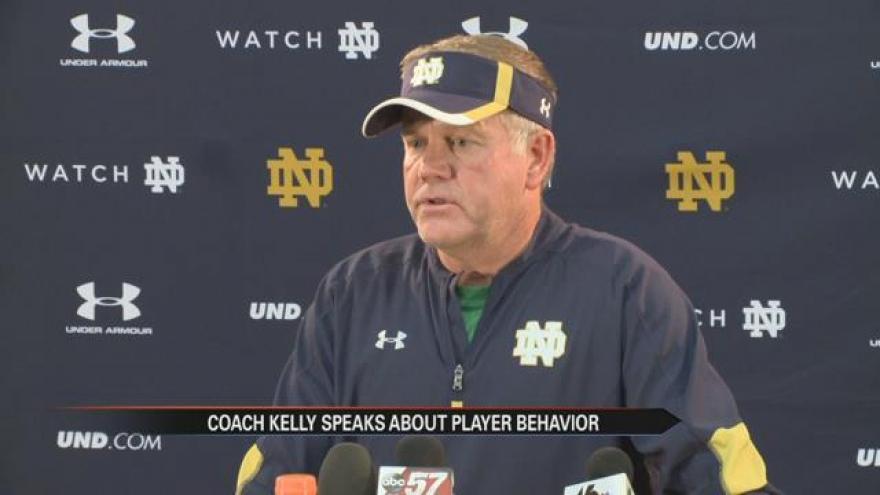 Coach Kelly faced the media and a barrage of questions about the six players arrested over the weekend.

Kelly says he had the same reaction as many Irish fans did when he learned what had taken place.

Six players were arrested in two separate incidents over the weekend.

Devin Butler has been suspended indefinitely, while Max Redfield has been kicked off the team.

“It's gotta be serious for me to dismiss somebody from the program,” commented the coach.

That's not the case with these other four players. The underclassmen in trouble with the law, are still on the team and available to play against Texas.

What about the handgun found in the car? Kelly says he does not know who it belonged to.

Minutes before Coach Kelly was scheduled to meet with the media, the team announced the four captains for the 2016 season: James Onwualu, Isaac Rochell, Torii Hunter, Jr. and Mike McGlinchey.

"It was a pretty special moment, I called my mom right afterwards and my dad and I was crying to them. It's a pretty big deal." said Mike Mcglinchey, Notre Dame Senior Captain.

"I knew I had to make sure this team was still going to go in the right direction and not let this be the identity of our team." said Hunter.

Senior Captain Rochell also commented on the incidents, "We're all disappointed, but we just have to keep moving forward and trust the administration, trust Coach Kelly and do as we're asked."

Kelly had been asked if the incidents over the weekends have changed his policy or opinion on how much free time he gives the players and said the team is handling it internally and doing what is appropriate for this group.