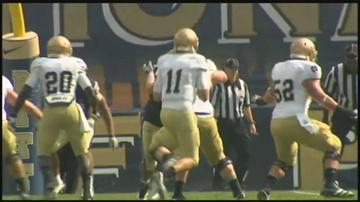 NOTRE DAME – There really is no fun in losing, just ask the head football coach at Notre Dame, Brian Kelly, “Really for me, it’s about winning games.”

Four games in to the season the team’s record is split right down the middle, 2-2.

Now, as the Irish get ready for game five, Kelly said he just wants to get another W on the board.

In their last two games the Irish have proved a win doesn’t have to be pretty and Kelly said that’s not what he’s looking for, a win is a win no matter what and that’s all that counts.

Still, there are a lot of things Kelly wants his team to work on, he said they need to manage the game, handle the ball, and most importantly, hold on to the ball.

Notre Dame pulled out a win last week 15-12 over the Pittsburgh Panthers, but Irish quarterback, Tommy Rees did not play very well.

The sophomore threw 16 incomplete passes in the team’s fourth game.

The head coach said his quarterback is still a little green, but has a lot of talent to work with.

“You could put together an incredible highlight reel with Tommy Reese this year, and you could also put together a blooper film,” Kelly said.

Kelly said he hopes Rees will become more consistent with time, “A lot of that is learning and experience and that’s where we’re in, that's year.”

But Kelly added that he needs to see improvement from, otherwise Rees will lose his top spot. “We better not be talking about this stuff next year” Kelly said, “Or there will be another quarter back playing.”

There were of couple of things Kelly said he was happy to see in game four he said the players stayed composed and trusted one another on the field.

Two things Kelly wants The Fighting Irish to carry on to the next game, “You know, another Big 10 school, another challenge on the road for our football team, playing in front of a national audience again,” Kelly said. Notre Dame faces the Boilermakers on Saturday night at Purdue; this will be the Irish’s third game in a row on the road.

“We’ve got to match a team’s intensity at home, on national television against Notre Dame, and you remember now every team that plays Notre Dame it’s their rivalry game,” Kelly said.

Purdue is 2-1 right now, well rested after a week off, but Kelly said Notre Dame is ready and the team knows what to work on, “Being focused and paying attention to detail in our game plan, so that’s very important to us as we go into week 5,” Kelly said.