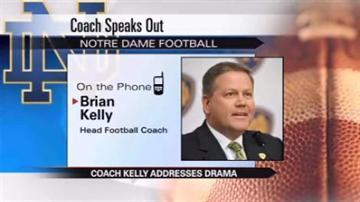 SOUTH BEND, Ind. --The Notre Dame football program made national headlines a couple of times in the last few weeks. First when Head Coach Brian Kelly interviewed with the Philadelphia Eagles. Then when the Manti Te’o fake girlfriend scandal broke. Kelly spoke publicly about the drama for the first time Tuesday.

Just 24 hours after his football team was blown-out by the Alabama Crimson Tide, Kelly sat down with representatives from the Philadelphia Eagles -- rubbing salt in the wounds of Irish fans around the globe.

“I will tell you the discussion was more about intrigue on my part,” said Kelly.

According to Kelly, the conversation was strictly educational, so he would know what he was turning down.

"That I am committed to Notre Dame. I am flattered that the NFL would want me to be one of their coaches but it's not what I want to do. I want to be a college football coach,” said Kelly.

But coach Kelly's flirtations with the Eagles were quickly forgotten just a week later when Deadspin broke the story of Manti Te'o's fake dead girlfriend.

Coach Kelly openly backed Te'o's story that he wasn't involved in the hoax.

"Every little thing that has come out over the past couple of weeks is what he told me. So I can only go on the information that he gave me versus what we're seeing out there and it was in lockstep,” said Kelly.

Now that the buzz around the scandal has quieted, one of the few questions remaining is about Te'os integrity.

"For me he will be, in my eyes, one of the very great teammates I've ever had in 22 years of coaching. He was special and he did all the things I think great players have to do on a day to day basis,” said Kelly.

Coach Kelly says his only regret about the Eagles discussion is not coming out with a statement sooner after the news broke.

He says he was on vacation with his wife and should've immediately reported his loyalty to Notre Dame.