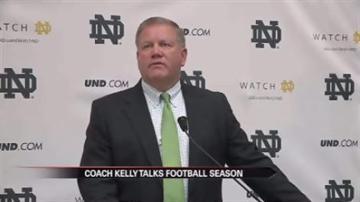 SOUTH BEND, Ind. -- Notre Dame Head Football Coach Brian Kelly held his first press conference of the season on Friday. It has been 207 days since Notre Dame played in the National Championship game but every single day since, Coach Kelly says the focus has been on his new team and the new season for the Fighting Irish.

Coach Kelly was all smiles at Friday's press conference.

It's new season, a new team and a new chance to take back the National Championship they came so close to claiming in 2013.

"Our guys were focused the very next day on early morning conditioning, building into our spring and into our summer so it's not even something that's even discussed," said Kelly.

After star quarterback Everett Golson made an unexpected departure from the university in May, Kelly chose senior Tommy Reese to start for the home opener versus temple.

Kelly said the choice was a no brainer.

"He was the most experienced, he's won. He obviously knows our very offense well. He's a senior, well-respected," said Kelly.

Reese is expected to be key to building this year's offense.

"We need to score more points. Internally, putting more points on the board is absolutely crucial. We think we'll be able to do that with a veteran quarterback in Tommy Reese," said Kelly.

Kelly says he looks forward to coming back with a strong defense again this season.

"Continue dominating defensive play. Improve our special teams, that will be short term, the things that we're looking at as we get ready for Temple," said Kelly.