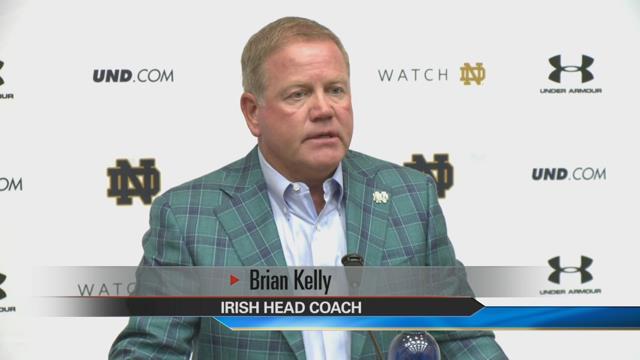 In his sixth year as head coach of one of the nation's most iconic football programs, Brian Kelly says he's getting a clearer picture of where he wants to take his team. This year - yet again - he is setting the bar really high.

When you coach a football program as highly regarded as Notre Dame-it's nearly impossible to avoid the spotlight.

"I don't know if you ever get comfortable in this seat at Notre Dame. Comfortable wouldn't be a word that I would use," Coach Kelly said.

Although Coach Kelly says he's still not comfortable in the spotlight - even after six years, he says he knows exactly where he wants to take his program.

"The picture is a lot clearer in the sense that I really know where our strengths and weaknesses are as a program," said Kelly.

Cornerback KeiVarae Russell was officially cleared by the NCAA on Tuesday.

Last year's academic misconduct investigation into the frozen five seems like a weakness of the past, but for Kelly, there is still a ways to go.

"Make sure that our kids are solidly supported academically and I think we're making great progress there," Kelly said.

One of the most celebrated characteristics heading into this season for Kelly is a power-packed team that boasts talent, experience and leadership.

"We've developed depth within the program and I think that's probably something that has taken time," Kelly said.

Although Kelly slyly mentioned that KeiVarae Russell is officially back and cleared by the NCAA, he says they're still waiting to hear Ishaq Williams' status.

Williams has written and submitted his own personal appeal to the NCAA and it's under review.

Kelly says he hopes to know more in the coming weeks.