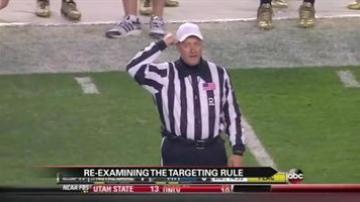 NOTRE DAME, Ind. -- The NCAA'S Targeting Rule is causing an uproar this season among fans and coaches alike. Head Coach Brian Kelly says the rule needs to be looked at again - and needs to be enforced consistently in all conferences and for all college football teams.

The NCAA's Targeting Rule that was put into effect for the first time this season states no player should target the crown of their opponents' helmet nor should they target the head or neck of a defenseless player with their helmet, forearm, fist, elbow or shoulder.

"When a 320-pound inside player is running from the hash from the numbers at full-speed, and trying to make a play and he gets thrown out of the game, I don't think that's what the rule was intended for," said Kelly.

In Notre Dame's game against Pitt, Irish Defensive Lineman Stephon Tuitt was taken out of the game because of the Targeting Rule when he tackled Panther quarterback Tom Savage.

"I don't see Tuitt as a guy going to target anyone, hit anyone with his helmet or injure anybody. He went out there and played hard football and at that point he just didn't want to give up a first down," said Louis Nix III, Irish nose guard.

"I think he was confused quite frankly," said Coach Kelly.

Before Tuitt was ejected early in the second quarter, Pitt was scoreless with just 48 yards of total offense versus Notre Dame's 124.

"We don't want to take that effort out of the game," said Kelly.

After the targeting call, Pitt put up all of its 28 points and more than 300 yards in total offense.

"We have a problem, we all recognize that, it's a real shame that a young man misses a game and I think we all recognize it has to be dealt with but we just can't deal with it until the end of the year," said Kelly.