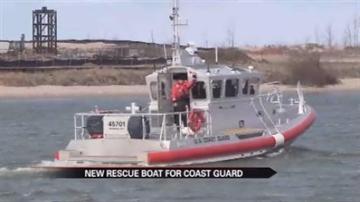 MICHIGAN CITY, Ind. -- The Coast Guard is ready for summer with a brand new response boat. The Michigan City station got it in September, but hasn't been able to try it out until now. Over the next few weeks, they'll be training and getting familiar with the watercraft.

The sound of heavy machinery signals a new start for the U.S. Coast Guard in Michigan City.

"We're excited to get back out on the water, and start doing some training," Becky Polzin, Senior Chief Petty Officer, said.

This year she and her crew have a new boat in the docks, the RB-M.

It comes equipped with features their old watercraft didn't have.

"From the drivers seat, you've basically got two joysticks. And if you want, you can drive it 360-degrees," Polzin said. "You can drive it sideways, at an angle, backwards; it's very, very maneuverable."

So when the wind starts kicking up, and the waves start roaring, she and crew members will be ready.

"It gives us another tool when we're out there searching."

And if people do need rescuing, they'll be happy to know the boat is more than capable. It's fitted with a new communication's system and an infared camera.

The main focus is geared towards preparing for the upcoming boating season.

"Normally, we go back into the boating season with a boat that we're all familiar with, that we've all been training on for the last couple of years," Polzin said. "But this one, we've only had for a couple of months now, so we're definitely going to do a lot more training than we would normally do."