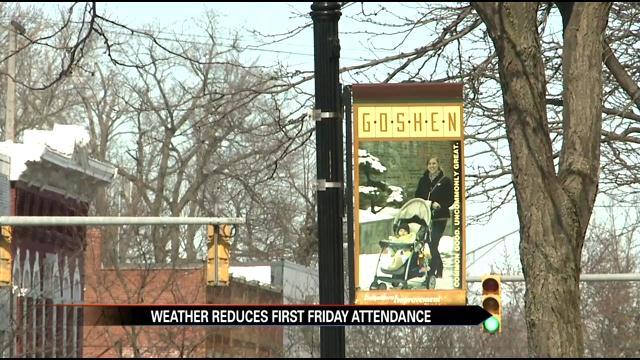 During the first Friday of every month local businesses in Goshen show off their goods and business owners say February was a little rough. On the first Friday of March the temperature hardly reached 20 degrees in downtown Goshen and the streets were fairly bare.

“It's still a cool day but it's a sunny day and I think and I hope people will be down,” says Scott Woldruff, Owner of Woldruff Shoes.

Woldruff has been in business for 22 years and has participated in every first Friday since it started eight years ago. During tonight's event, Woldruff is optimistic that his employees will be punching cash registers and packing up purchases.

“Tonight I am hoping that the weather gets a little bit warmer so people will want to come out. But we do have warm stores and you can hang out and listen to music and watch performances,” says Kelly Kenny, the Event and Media Coordinator for Downtown Goshen First Fridays.

Kenny says tonight some stores will host local performers. Keith Gerber Miller co owner of ‘Found', a local artisan shop, says he will not be hosting an artist; but expects people from all over the region to stop by and check out his product.

“We have people who come in from South Bend, southern Michigan, from Warsaw, and from Fort Wayne,” says Gerber Miller.

Gerber Miller also thinks the cold could play in his favor.

“The nice thing about the cold is people will still come out because it is a beautiful day but they come out and then they come in the shops. They don't want to stay outside too long,” says Gerber Miller.

“Many will be anxious to get out and do something we have been cooped up all winter here,” says Woldruff.