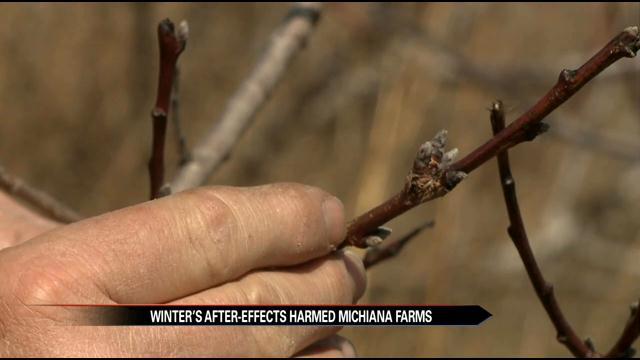 The lake effect snow that brought the frigid temperatures to Michiana this winter may have passed us but the after effects are hurting local farms.

Larry Eckler's farm is not only an attraction for residents of Niles but also a main retailer of fresh produce.

He tells me after this winter season though, many residents might not be able to find some of their favorite fruits and veggies in the area.

“We grow about 100 acres of produce and the majority of it is sold right here” said Eckler.

Eckler, a second generation farmer from Niles, has seen his farm grow into a fruitful local business.

With over 50 years of farming, his family's farm is a staple in the community.

“We've been here long enough that people know we're here and we have a few small stands that come get produce for their stands if they run short but for the most part, just retail consumers," he said.

But the brutal winter that blanketed Michiana this past winter could cause him to lose some of his crops.

“Usually when hit below 12 below degrees it starts to thin out the peaches and if you hit colder than that it can knock out all the peaches,” said Eckler.

Eckler is one of the few local providers of the fruit in the area.

And when these trees can't produce those peaches, the community loses.

Although harvest for peaches doesn't start until later in the season, Eckler can tell he will lose most of his peach population – much like he did last year.

“If it happens again that's just another expense and you don't make anything for another year,” he said.

Although many peaches might not be for sale this season, folks can still choose from other fruits and vegetables that survived the winter.