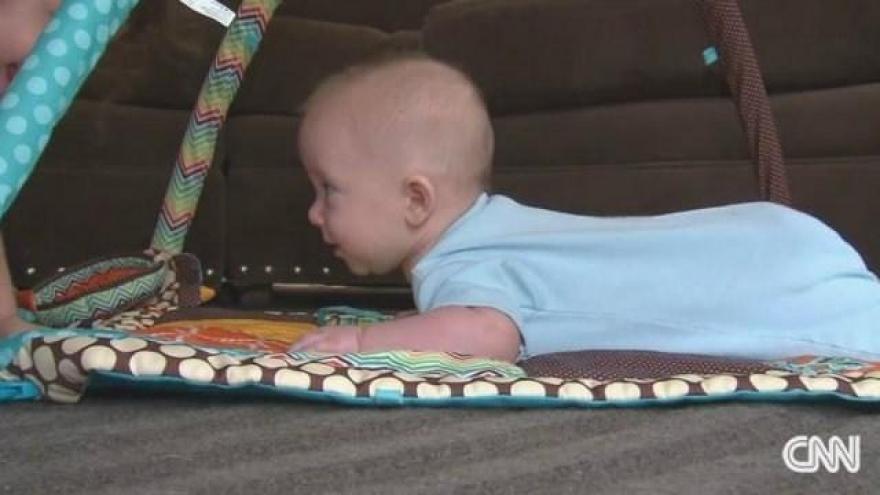 Although some bawling is normal for babies, excessive crying for more than three hours a day, lasting more than three days a week, might be a sign that a doctor's intervention is in order.

Excessive crying is known as infantile colic, and a new study suggests that acupuncture may reduce colicky crying when other treatments don't help.

Yet not all experts agree that there is enough evidence to deem acupuncture a safe and effective approach to reduce a colicky baby's cries -- and some have criticized the new study.

Colicky babies who received acupuncture in the new study appeared to cry less after treatment than those who didn't receive acupuncture, said Kajsa Landgren, a lecturer in the department of health sciences at Lunds University in Sweden.

Landgren was lead author of the study, published in the journal Acupuncture in Medicine on Tuesday.

Many studies suggest that acupuncture can relieve pain, restore gastrointestinal function, and have a calming effect in adults, Landgren said. But, for infants, " a definite benefit is that acupuncture shortens the strenuous period of colic," she said.

Many other experts, including David Colquhoun, professor emeritus of pharmacology at University College London, have been outspoken about how the new study is flawed.

Colquhoun called it, "An appallingly bad paper on acupuncture," in a Facebook post Tuesday, adding that the study was small and the findings were not statistically significant.

Infantile colic is the cause of 10% to 20% of all early pediatrician visits for babies 2 weeks to 3 months old, and it typically peaks around 6 weeks of age.

'I was a bit surprised'

The new study involved 147 infants in Sweden, between 2 and 8 weeks old, whose parents sought help for colic. The little ones were separated into three groups.

Outside of occasional crying and a single drop of blood appearing in 15 occasions, no significant adverse effects occurred during the acupuncture sessions.

Meanwhile, without knowing which group their children were in, all the parents were asked to record their babies' fussing and weeping in a daily diary.

After the two weeks, the amount of crying that the parents recorded among all of the infants dropped, which the researchers noted in their study was expected, since colic tends to clear up on its own over time.

However, the magnitude of this reduction was greater in infants who received acupuncture compared with those who didn't, the researchers found.

"I was a bit surprised that there was no significant difference between the two acupuncture groups," Landgren said. "During the second intervention week, only 38% of the infants who received acupuncture fulfilled the criteria for colic, compared to 65% in the control group."

A similar study of 81 infants conducted by Landgren and her colleagues in 2010, published in Acupuncture in Medicine, also found that acupuncture shortened the duration and reduced the intensity of crying in infants with colic.

On the other hand, a study of 90 infants published in the Scandinavian Journal of Primary Health Care in 2013 found no statistically significant or clinically relevant effect of acupuncture.

Don't call the acupuncturist quite yet

Whether acupuncture can be an effective approach for infantile colic has been the subject of an ongoing debate.

Researchers at the University of Turin in Italy called for more research into treatments for infantile colic in a 2014 paper in the Italian Journal of Pediatrics. The paper noted that there is limited evidence supporting the use of alternative treatments, such as acupuncture.

The lead author of that paper, Francesco Savino, said Sunday that although he read the new study "with great interest," his opinion on acupuncture for the treatment of infantile colic hasn't changed.

Dr. Jason Homme, a pediatrician at the Mayo Clinic in Rochester, Minnesota, who was not involved in the new study, also said more research is needed in the efficacy of baby acupuncture.

"I don't intend to change my current practice or recommendations based on this study," Homme said. "The finding that acupuncture is superior to the gold standard may be supported by the statistics provided but, to a practicing clinician, seems overstated."

Additionally, infantile colic is difficult to measure, he said. Though researchers have explored whether allergies or bacteria in the digestive system may be linked to colic, the ultimate cause remains a mystery.

"Despite attempts to define infant colic, it still represents somewhat of a moving target for research," Homme said. "It relies on the subjective assessment of parents and caregivers."

What's a parent of a colicky baby to do? Many experts, including study author Landgren, recommend omitting cow's milk from an infant's diet.

Based on parents' diaries, only 157 out of 426 infants met the criteria for colic after cow's milk was eliminated from their diets, Landgren said, citing a finding that emerged during the screening process of participants for the new study.

As for other home remedies, "time-honored soothing techniques include swaddling, soft sounds, such as white noise, and gentle motion, such as rocking," Homme said. But overall, a doctor should examine any infant who is excessively crying, as it could indicate a more serious health condition, he said.

If there is no serious health condition, "parents and caregivers should be counseled that, while the infant may seem distressed, the crying in and of itself isn't harmful to the child, and sometimes it's best to simply put them in a safe location, like a crib, and take a short 10-minute break from soothing attempts," Homme said. "These efforts can be very wearing on the caregiver."

Parents should keep in mind that infantile colic typically ends by 3 to 9 months old, according to the American Pregnancy Association.

"Many things have been tried for infantile colic, but time is the only consistent remedy for most children," Homme said.

To determine whether your baby has infantile colic, Landgren recommends keeping a daily diary of how often your baby cries. It can be helpful to present the data to your doctor.

"When parents experience excessive crying in their baby, the first important thing is to record the crying in a diary to evaluate the duration and intensity of the crying," she said. "Tired and worried parents often overestimate normal crying."