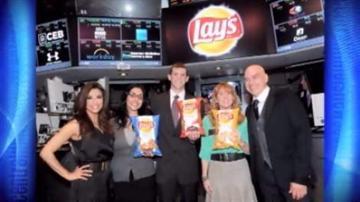 NORMAL, Ill. -- A college student is a finalist in the Lay's "Do Us a Flavor" competition.

Sriracha, chicken and waffles and garlic cheese bread all have something in common: they're the three flavors left in a Lay's chip competition.

One of the finalists is a college student from Illinois.

When Tyler Raineri entered the Lay's "Do Us a Flavor" competition, he never imagined his flavor, sriracha, would make it to the finals.

The Illinois State University student would win a million dollars if his flavor is chosen.

He says the sriracha flavor was inspired by his grandmother, and of course, his fraternity brothers.

"My grandma made homemade chips and we've always dipped stuff in sriracha sauce. Anything--pasta, chips, and we have sriracha sauce in our kitchen here so that was another big part," said Raineri.