College student comes out as lesbian, school asks her to hide sexual orientation 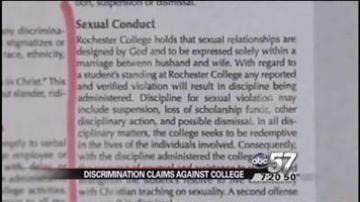 OAKLAND COUNTY, Mich. -- A college student recently came out as a gay woman.

She has the support of her family and friends, but the same can't be said for her school!

Kiah Zabel is a 19-year-old student at Rochester College, a Christian-based school in Oakland County Michigan.

She recently told those close to her that she was gay. She posted a Facebook photo that said, “Out, proud, and lesbian.”

The Dean of Students sent Zabel a letter asking her to take down the photo. If she said “no” she could be kicked out of on-campus living. And with that the debate began. Zabel doesn't feel she should be punished for being honest.

School officials also asked her to hide the fact that she is lesbian.

"I have to hide [my sexual orientation] and I can't talk about it or anything, and I have to conform to everything the school says," explained Zabel. “I just told [the Dean of Students] it wasn't fair and I told him it was discrimination."

In response the school didn't deny that they asked her to keep her sexual orientation a secret, but did say that she was never threatened to be dismissed from on-campus housing.